That’s what someone, somewhere, has decided to label me and a few million other young people, ranging in age from teens to early thirties.  At 27, I guess I’m about right in the middle.

We are, Madison Avenue says, a lost generation that is absent of ambition, squandering our intellect, and lacking in direction and identity.

In August, a few hundred thousand of these Xers gathered in upstate New York and tried to recreate the magic of a grand concert that our parents’ generation held 25 years ago. And I guess some feel that we even managed to screw that up, as Woodstock II forgot the little part about getting a powerhouse lineup of great bands.
I don’t buy any of it.

We do have an identity. We do have our own past, our own memories, our own music, and our own heroes.

The Who talked about their generation.

I’ll talk about ours.

Our generation, the one they call “X,” consists of anything that we can recall happening in our lifetime. And, so far, it’s been a pretty cool ride.

I can vaguely recall, as a young child, hearing “American Pie” on the radio and being intrigued by its lyrics. I can remember listening to Elvis Presley albums with my grandfather, marveling at his wonderful voice. I can recall watching old Monkees reruns on TV, and thinking that’s how life for a rock band actually was. And right around that same time, I recall seeing four guys from New York City slapping on the greasepaint, cranking up the amps and becoming “The Hottest Band In The World.”

But music is only a small part of it. There’s much more.

Generation X is Little League, dance recitals and fireworks on the Fourth of July.

Generation X, probably more than anything, is "The Breakfast Club."

Generation X is astronauts. Remember the blastoffs? The splashdowns? Do you recall hearing those static-filled voices, “Come in Houston. Houston, do you read?” and seeing that tiny little white dot on the TV screen zooming towards the stars and thinking, “Wow, guys are actually in there.” Every little kid wanted to be an astronaut. (Until we found out it was really, really hard.)

Generation X is “Purple Rain,” “Pyromania,” “Born in The U.S.A,” “The Joshua Tree,” “Synchronicity” and “Thriller.”

Generation X is concerned about the environment and the future of the world. It’s U.S.A for Africa, Greenpeace and Amnesty International.

Generation X does have ambition. We still study to be scientists, teachers and doctors.

Generation X, like Generation A or Generation C or whatever generations came before it, also likes a long walk on the beach, a cool summer breeze and a beautiful moonlit fall night.

People never really change and our lives, in part, serve as both a mirror and a reflection of what goes on around us. And really, there’s no need to look to the past, or the future, to find an identity. We’re doing OK, right now, and we’re still only just beginning. If you look hard enough, you’ll see. We’re leaving our mark, here and there, slowly but surely. And when we’re all gone, the things that we built, the impressions that we left, and the changes that we’ve made will be even easier to recognize. 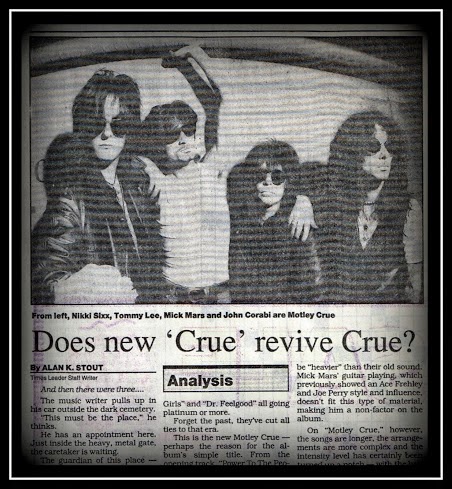 
And then there were three ...

The music writer pulls up in his car outside the dark cemetery.


“This must be the place,” he thinks.

He has an appointment here. Just inside the heavy, metal gate, the caretaker is waiting.


The guardian of this place -- the heavy metal graveyard -- is holding a staff and dressed in a brown hooded robe.


“The Reaper himself,” the writer murmurs as he approaches the entrance.


“Did you bring it?” asks the Reaper. “Do you have the new Motley Crue?”


“C'mon then,” the Reaper devilishly smiles. “My CD player is inside.”


During the hundred-yard walk through the cemetery to the Reaper's cottage, the writer reads the surrounding headstones: Twisted Sister, Dokken, Ratt, Quiet Riot, Judas Priest ... they're all there.

“The graveyard is pretty crowded these days,” sighs the Reaper, whom the writer notices is wearing an Iron Maiden T-shirt under the open robe. “Too many good bands.”


“I thought a few of those groups were still around,” says the writer.


“What, playing little clubs, with different lineups and no recording contracts?” he shoots back. “No, they belong here. It's too bad. We had a nice run there for a while.”


“There aren't many of the big ‘80s hard-rock bands left, are there?” the writer asks.


“Just three," he sadly whispers. “Bon Jovi and Def Leppard are still doing pretty well.” He points to the Motley disc. “And these guys. Well, this album will decide. We don't want to lose another one.”

The writer points to a “Warrant” headstone, over which someone has spray-painted “Pearl Jam.”

They finally reach the Reaper's home.

It's time to listen to the music.

Motley Crue, the American heavy-metal supergroup of the '80s, stepped into the '90s on March 15 -- treading new waters with the release of their seventh LP, the self-titled “Motley Crue.”  It's their first release since the group's original vocalist, Vince Neil, was given the boot over a year ago, apparently because of a perceived lack of dedication. It's also the band's first true new release of the decade, save for a greatest hits package released in 1991. Combine those two factors with the fact that since 1989's “Dr. Feelgood,” the hard-rock scene has experienced a complete transformation, and you have a band at a crossroads.


With the Seattle-based Soundgarden holding the number-one LP in the country, and bands like Pearl Jam and Stone Temple Pilots leading the grunge movement, flashy clothes and singing about babes is out.


Still, it could be easily argued that grunge is nothing more than tuned-down heavy metal, with the kids wearing flannel shirts and black shoes instead of denim jackets and high-top sneakers. Songs like Pearl Jam's “Even Flow” and “Jeremy” and Soundgarden's “Outshined” were first showcased on MTV's “Headbangers Ball,” and grunge is certainly much closer to metal than it is to alternative.

But where does this leave Motley Crue? The band was the epitome of '80s glam-macho-metal and thrived in an era when hard-rock ruled the charts, with “Too Fast For Love” “Shout At The Devil,” “Theater of Pain,” “Girls, Girls, Girls” and “Dr. Feelgood” all going platinum or more.


Forget the past, they've cut all ties to that era.

This is the new Motley Crue - perhaps the reason for the album's simple title. From the opening track, “Power To The People,” it's apparent that they've been watching the trends, watching the charts and may have wandered through that mythical graveyard themselves.


“Motley Crue” is not a great album. It is, however, the album they had to make. Bon Jovi survives simply because they write great songs. Def Leppard survives because they have developed a sound that is distinctly their own. But Motley Crue really wasn't much different from most of those groups now lying in that cemetery, or in the discount rack.


There's no “Home Sweet Home” here. This is power-metal-grunge. It's Soundgarden meets Metallica, and more. There's “Uncle Jack” with its churning Black Sabbath-like bass-line, and “Misunderstood,” an Aerosmith/Tesla-type number unlike anything Motley has done before. It’s also one of the best things Motley has even done.


Highlights include “Hooligan's Holiday,” a song screaming with the kind of intensity which originated the metal movement and provides an “it feels good to be a little ticked-off” adolescent sensation. And “Loveshine,” a semi-acoustic number, showcases new vocalist John Corabi's easy-style vocal ability, something Motley always lacked with Neil. Corabi also plays some guitar and co-wrote all of the LP's lyrics with Nikki Sixx, who previously carried much of the load himself.


But again, it's not a great album. There are quite a few clunkers, too. On many tracks, such as the profanity-tainted “Poison Apples,” “Hammered,” and the bland “Til Death Do Us Part,” the band tries too hard to be heavier. Mick Mars' guitar playing, which previously showed an Ace Frehley and Joe Perry style and influence, doesn't fit this type of material, making him a non-factor on the album.


On “Motley Crue,” however, the songs are longer, the arrangements are more complex and the intensity level has certainly been turned up a notch, with the better songs appearing early on the disc. Sixx's bass sounds bigger and badder than ever and Tommy Lee remains one of rock's premier drummers. It's not the Motley Crue kids grew up with and it may cost them some fans, but it may also gain them some new ones. The die-hards will probably just roll with it.


You can expect a high chart debut on Billboard this week, but with the new Soundscan system, all that means is that there were many advance orders and the die-hard fans bought the record in its first week. You can give Motley Crue credit for growing a bit, and for knowing what’s happening today in music, but to determine if an album from an established act really has legs, you have to check the charts three or four weeks down the road. After that, success is in the hands on MTV. Heavy rotation means heavy sales. Period.


The writer and the Reaper exit the house.


“What are those three empty graves up on top of that hill for?” asks the writer.


“Those are for Aerosmith, AC/DC and KISS,” he says. “They have a special place here. It doesn't look like they'll be coming here until they decide they're ready.”


“And what about that dug-out one, way over there?”


“Well, do you think you'll need it? You've heard the record.”

(Originally published in The Times Leader on March 24, 1994. By the late '90s, some of the more popular '80s hard-rock bands that had been brushed aside by grunge were enjoying comebacks and back to playing before big crowds. To follow Alan K. Stout's musings on music, visit www.facebook.com/musiconthemenu.)