George Wesley died on July 19. He was only 62. It was only a few weeks prior when most people learned that the local music icon was battling cancer, and a benefit show was already being planned for September at the River Street Jazz Café.  The hope of those planning the event was that Wesley – who had always been there to help others at such benefits - would be feeling better by then and would be able to attend. But it was not to be. And many of Wesley’s fellow local musicians, and many of his fans, were devastated.

It was soon decided, however, that the show would go on. And “Maximum Respect: A Tribute To George Wesley” will take place at the River Street Jazz Café on September 2. All monies raised will be donated to Wesley’s family to help offset medical costs incurred during his illness. And, equally important, the event will serve as a celebration of the life and the music of one of NEPA’s most beloved and respected musicians.

Tom Flannery, who was a close friend of Wesley’s and who will perform at the tribute, says the reggae master was simply an irreplaceable figure within local music community.

“He’s our man in black,” says Flannery. “You know what the world says about Johnny Cash? Well, NEPA can say the same things about George. If we had a musical Mount Rushmore in the valley, his might be the only face on it. And the face would be 60 feet long, and the beard would hang down until it dipped into the Susquehanna.”

In addition to his talent, Flannery says it was Wesley’s warm and caring personality for which he’ll always be remembered best.

“People didn’t just say, ‘I knew George.’ They’d say, ‘George was a friend of mine.’ That’s two totally different things when you think about it,” says Flannery. “He died an exceedingly rich man.”

The name of Friday’s tribute, “Maximum Respect,” comes from a phrase Wesley often used. When he said it to someone, it was a gesture of thanks, or as a kind compliment.  Flannery says every musician in NEPA respected Wesley.

“Last year we started writing some songs together,” he says. “We planned on making a record. I had all these lyrics and he came over one night and, one at a time, he’d read them. And a melody would fall out of him. Not in an hour. Or a few minutes. Immediately. It was instantaneous. Music was as natural to George as exhaling. We were friends for over 20 years and I never stopped being in awe of him.”

John Shemo, who will perform at the benefit with Mother Nature’s Sons, agrees.

“George brought reggae music to this area,” says Shemo. “He was also a pioneer, locally, with looping music. George sounded like an orchestra every time he played - looping guitars, bass, drums, horns, marimba, steel drum, etc. He was truly the ‘Small Axe Orchestra.’ And every time he stepped on the stage, he was the ultimate professional. He was also a good soul and a very kind person who truly cared about his friends, family and most of all, his audience. He always gave his best performance and wanted people to enjoy his music and leave their troubles behind. He was inspirational and motivational.”

One of Shemo’s favorite memories of Wesley is quite poignant.

“I’ve played many shows on stage with George, but I’ll never forget when he asked me to join him, with acoustic guitars, to play for patients in the hospital,” he says.  “He brought smiles to many faces with songs like ‘You Are My Sunshine’ and ‘Three Little Birds,’ spreading encouragement and hope. While he loved to rock out on stage, he was also kind and compassionate.”

Other Wesley stories are simply funny, such as this one from bassist Terry Cummings of Strawberry Jam, who will also perform at Friday’s tribute. 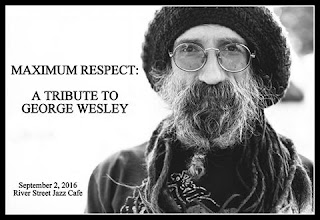 “I was out on the road for about a six-month stint with George,” says Cummings. “George had generously offered the gig, so I was very grateful and respected the fact that he was the boss. He was totally cool, but it was his band, so I would have played or done whatever he wanted. We were playing a gig in upstate New York - a big outdoor festival with a great crowd. I was playing bass through two 18" cabinets stacked on top of each other, powered by a big PA amp. Volume knobs only. It was so beefy and loud that it vibrated my clothes. I started thinking that George was going to turn around and tell me to turn it down. Just then, George looked at me, looked back at my amp, looked at me again, looked back at my amp again, and yells, ‘Turn it up!’ I yelled back, ‘I love you man!'

“I can't believe he's gone,” adds Cummings. “I'll always love and miss him. He should have been world famous.”

Christopher Condell, who served as Wesley’s drummer for nearly 12 years, says Wesley had a way of bringing people together.

“His legacy is unity,” says Condell. “He always respected all musicians. Rock, metal, blues, country, pop, polka, and of course, reggae. We've had all types of musicians sit in with us. He did not discriminate who you were or what type of music you played. It was all music to him. No genres, no boundaries - just music.”

Bret Alexander, formerly of The Badlees and currently a member of Gentleman East, also sees Wesley as someone that could play any type of music and still inspire people.

“I was playing at an open-jam at a place on Lake Sheridan,” says Alexander, who will also perform on Friday. “Tiny place. Way out of the way. In walks George. I wouldn't have expected to see him there.  He comes up on stage and grabs an acoustic guitar. I'm thinking, ‘OK, we are going to do some reggae.’ But no. He breaks into a true-to-form rendition of  ‘This Land Is Your Land.’  A pure folk version. We all laid into it and the place went nuts. So you have bikers, hippies and hillbillies all singing along to a Woody Guthrie song with a guy with the inflections of Peter Tosh. It was one of the most ‘American’ moments I have ever experienced. If I was from another country and I witnessed that performance, I would have moved here immediately.” 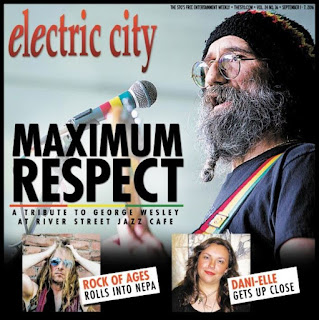 Bryan Tomzak of the band Lonesome Road also remembers Wesley as someone always willing to help others, noting that Wesley had performed at several benefit shows which he had organized. “He was giving, both personally and professionally,” says Tomczak. “And he wasn't just a reggae player. He was talented all around.” Tom Borthwick, the owner of SI Studios in Old Forge, says, “George’s legacy was his creative vibe. Music flowed from him like a river. He enjoyed life and had a very warm soul.”  Blues artist Phyllis Hopkins, who was a close friend of Wesley’s and had recorded with him, also marveled at his creativity.

“His greatest musical legacy is his incredible songwriting and musicianship,” says Hopkins. “And that comes through on the CDs that he left for us.  I remember George as a kind, warm-hearted person who always wanted to make other people feel good. He had a great sense of humor, too. Every time I saw him, I was inspired.”

Perhaps no one is feeling the loss of Wesley’s passing more than his son, James, who had drummed with his father and who will also perform at Friday’s tribute. He says his family has been overwhelmed by how many people have reached out to them since his father first became ill.

“I thought that I was prepared for the love and support after his death, but the response was far greater than I had anticipated,” he says. “I got calls, texts and e-mails from all over the country. In fact, they're still coming in. The heartbreak that I feel after his loss is somewhat softened by the beautiful stories I hear from countless colleagues and fans. NEPA really pulled through for him and my family and I couldn't be more grateful. Please know that the people of NEPA helped make his last days much easier and his last thoughts were about trying to get back on stage to show his appreciation the only way he could - with his music.”