U2 in Philly: uplifting and inspiring 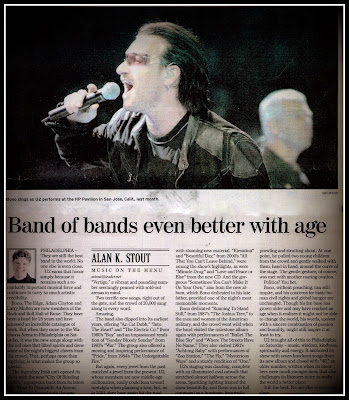 BAND OF BANDS EVEN BETTER WITH AGE

PHILADELPHIA - They are still the best band in the world. No one else is even close.

U2 earns that honor simply because it remains such a remarkably important musical force and continues to carry so much artistic credibility.
Bono, The Edge, Adam Clayton and Larry Mullen are now members of the Rock and Roll Hall of Fame. They have been a band for 25 years and have amassed an incredible catalogue of work. But when they came to the Wachovia Arena in Philadelphia on Saturday, it was the new songs along with the old ones that lifted spirits and drew some of the night's biggest cheers from the crowd. That, perhaps more than anything, is what makes the group so special.

The legendary Irish unit opened its show with the new “City Of Blinding Lights,” a gorgeous track from its latest CD, “How To Dismantle An Atomic Bomb,” and followed with the new “Vertigo,” a vibrant and pounding number seemingly penned with sold-out arenas in mind.

Two terrific new songs, right out of the gate, and the crowd of 20,000 sang along to every word.
Amazing.

The band also dipped into its earliest years, offering “An Cat Dubh,” “Into The Heart” and “The Electric Co.” from 1980's “Boy” and an impassioned rendition of “Sunday Bloody Sunday” from 1983's “War.” The group also offered a moving and inspiring performance of “Pride,” from 1984's “The Unforgettable Fire.”

But again, every jewel from the past matched a jewel from the present. U2, whose members are now middle-age millionaires, easily could lean toward nostalgia when planning a tour, but, as in 2001, they have again hit the road with stunning new material. “Elevation” and “Beautiful Day,” from 2000's “All That You Can't Leave Behind,” were among the show's highlights, as were “Miracle Drug” and “Love and Peace or Else” from the new CD. And the gorgeous “Sometimes You Can't Make It On Your Own,” also from the new album, which Bono dedicated to his late father, provided one of the night's most memorable moments.

Bono dedicated “Running To Stand Still,” from 1987's “The Joshua Tree,” to the men and women of the American military, and the crowd went wild when the band visited the milestone album again with performances of “Bullet The Blue Sky” and “Where The Streets Have No Name.” They also visited 1991's “Achtung Baby” with performances of “Zoo Station,” “The Fly,” “Mysterious Ways” and a sturdy rendition of “One.”
U2's staging was dazzling, complete with an illuminated oval catwalk that stretched almost halfway across the arena. Sparkling lighting framed the show beautifully, and Bono was in full command as a frontman, frequently prowling and strutting about. At one point, he pulled two young children from the crowd and gently walked with them, hand in hand, around the curve of the stage. The gentle gesture, of course, was met with another roaring ovation.
Politics? You bet.
Bono, without preaching, can still inspire, and his concerns for basic human civil rights and global hunger are unchanged. Though his fan base has grown older and may have reached an age when it realizes it might not be able to change the world, his words, spoken with a sincere combination of passion and humility, might still inspire it at least to try.
U2 brought all of this to Philadelphia on Saturday -- music, wisdom, kindness, spirituality and energy. It anchored its show with seven knockout songs from its new album and closed with “40,” an older number, written when its members were much younger men, that also challenges its listeners to try to make the world a better place.
Still the best. No one else even comes close. 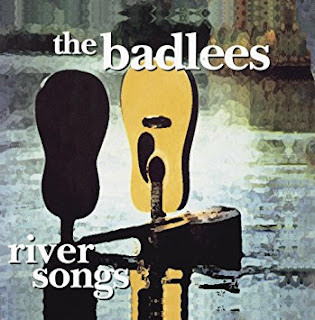 This week marks the 10th anniversary of the The Badlees' monumental "River Songs" album. It is the album that landed the band the first of two national recording contracts and eventually put it on the national charts, VH1 and the stages of some of the country's largest arenas.

It is an album that helped forever change the face of music in Northeastern Pennsylvania.

I went back down to that special river last weekend and swam in its waters. I popped "River Songs" into the car stereo and took it for a good long ride, amid the mountains and valleys that helped inspire it. I drove along the Susquehanna, for which the album was named, and I cruised by some of the bars and clubs where its songs were first played. I recalled the magic of hearing the album for the first time, and I again appreciated its significance.

Because The Badlees are a true roots-rock unit, their music remains fashion-free and timeless. "Angeline Is Coming Home" is still a terrific pop song, though its almost biblical, non-judgmental "Prodigal Son" theme clearly makes it so much more. Though the tune might still be in karaoke machines across the nation, and I once heard its familiar melody set to Muzak in a supermarket, its vibrant and celebratory message of unconditional friendship still makes it a lyrical gem and a bit of a pop oddity.

(I don't know how many of the millions who have heard the song know it's actually about a woman coming home from rehab, but, to their credit, the band and songwriting partner Mike Naydock have always told anyone who asks.)

"Fear of Falling," used by NBC-TV during the 1996 Winter Olympics, sounded like an instant classic a decade ago and has stood the test of time as well, and the Springsteen-esque "Angels of Mercy," with its soaring chorus, driving power chords and thumpy bass line, remains one of the best tracks on the album. The nearly two-year "River Songs" tour swung across America not once but twice, and "Angels of Mercy," spiced with a keen, post-grunge sense of optimism and humor, was the perfect opening song almost every night.

The eclectic instrumentation of "River Songs" also contributes to its genius. Mandolins, dulcimers, kazoos, organs and dobros all find their way into its stirring 11 tracks, and you'd again have to dip into the Springsteen catalog to find a more thoughtful and perfect use of simple harmonica than the poignant "Ore Hill." At the time of its release, I recall, friends said "Ore Hill" brought tears to their eyes. Such a connection is difficult to make with music, but The Badlees — named by Times Leader readers as their favorite band two months before the release of "`River Songs" — had made that connection.

"River Songs" was released locally in February 1995, and, after the band signed with Polydor/Atlas records, re-released nationally in October. It was an exciting time, not only for a fan but also for a journalist covering a band that was hitting on all cylinders. When people sometimes ask me for my favorite professional moment in journalism, it takes only one second to answer. It was the fall of that year, watching the group perform at the 18,000-seat Buffalo Memorial Auditorium, only eight months after seeing the band playing in local clubs, often for just a few hundred people.

"We'd like to thank Robert Plant and Jimmy Page for having us here tonight," vocalist Pete Palladino said.

Some of the plentiful "River Songs" stories have never been told. Gregg Allman was so impressed with the album that he once asked the group's principal songwriter, Bret Alexander, to help him write some songs. And when Polydor asked legendary mixer Bob Clearmountain to remix "Angeline Is Coming Home" for national release, Clearmountain called Alexander and said he thought the self-produced song sounded fine as it was.

Still, despite its excellent production, gripping harmonies and clever musicianship, it's the lyrics that make "River Songs" such a special album. Listen to the wit of the country-flavored "I Liked You Better When You Hated Yourself," the wisdom of the stompy "Nothing Much of Anything" and the breezy flow of "Gwendolyn," which can still draw the most reluctant wallflowers to the dance floor, and you, too, will again feel its magic.

Listen to the extraordinary depth of "Bendin' The Rules," which tells the tale of a struggling family desperately trying to provide medical attention to its ailing son, and follow the cinematic images of the epic "Song For A River," and you once again will be reminded of its greatness.

"River Songs," 10 years later, remains a mini-masterpiece, and though the band has since recorded several more outstanding albums, it remains monumental not only because of its quality but because of its importance. Though The Badlees time with Polydor was turbulent and ultimately - due to the Polygram/Seagrams sale -  disappointing, it did open at least a few musical doors not only for their career but for dozens of other area bands who now present their art with confidence and whose art is now given a fair listen. Because of "River Songs" we know bands from our home region can make a record just as good if not better than any we've heard.

I revisited that special river last weekend, and I saw "River Songs" for all it once was, all it remains and all it has become: