Elvis' music is his lasting legacy 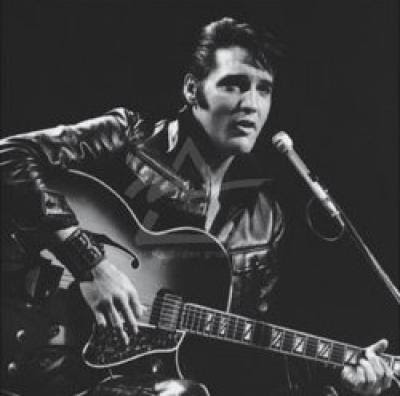 Remember `The King' for his character, talent and contributions

Elvis Presley should still be here.


It was 25 years ago today, however, that the undisputed King of Rock 'n' Roll left the building at the tender age of 42. And he is, without a doubt, missed just as much today as he was on that August afternoon when we first learned of his passing.


A lot of rock-music writers like to use the word "derivative" when they talk about music. Sometimes they use it as a compliment, sometimes as an insult. All it really means is that an artist has been influenced by another. Everything in pop music - everything - is a Presley derivative.


Five years ago, on the 20th anniversary of Elvis' death, I wrote a column about Presley's importance to the history of rock music and his unparalleled significance in pop culture. Today, I'm sharing some of those same thoughts.  And that's because everything you read about pop music in this or any newspaper or magazine is reflective of Presley. The club listings. The concert listings. The album reviews and the interviews with the local bands and the big stars.  It all goes back to Presley.


It all goes back to the poor kid from Mississippi who came out of nowhere and, in 1956, helped kick open the door to a new and exciting sound.


Elvis' health, due to his own vices, failed him.  His voice never did.


Today, on the anniversary of his death, remember the good things about Elvis. Forget about the tacky wall murals, lamps and porcelain plates and rumors of  "sightings." Forget about the unwarranted mockery sometimes aimed at him by people without half his talent or character.  Remember the man who, even after his burst of fame, still referred to people as "ma'am" and "sir," and who even won over an initially hesitant and skeptical Ed Sullivan with his kindness and humility. Remember the man who, at the height of career, went off to Germany to serve his country in the Army. Remember the man who, while there, asked for no special treatment and quickly befriended the men in his unit.


Remember the man who loved to share his wealth - a man who would buy friends and even strangers automobiles, and who, if you admired a piece of jewelry he was wearing, would often take it off and give it to you.


Remember the man who was always quick to give credit to the unheard-of black artists from whom he borrowed much of his early sound. Remember the man who, with his remarkable " '68 Comeback Special," actually laid the groundwork for MTV's popular "Unplugged" series.


If you're out on the town tonight, ask your favorite band to play a little Presley. The good ones - the ones that know a little about the linkage of rock 'n' roll - will be happy to.  Artists such as Bruce Springsteen, Robert Plant and Billy Joel have all covered Presley's songs. Plant, according to one story, was actually able to meet Elvis and sing a few bars of "Love Me" with The King. In 1975, Springsteen, a star himself at the time, tried to scale the gates of Graceland hoping to meet his idol. KISS' Gene Simmons has said the band closed its Aug. 16, 1977, show with "Jailhouse Rock." The members of U2, in the rock documentary "Rattle and Hum," are shown visiting Presley's grave at Graceland. It is one of the most poignant scenes on the film. And five years ago, on the 20th anniversary of Elvis' death, our own Badlees, playing right here in Wilkes-Barre, offered a soulful cover of "Suspicious Minds."


If you're a fan of rock 'n' roll, take just a minute or two today to show him some of the same respect. Call your favorite radio station and request one of his songs, play one on the jukebox at your favorite hangout or just hum one of his tunes in your head.


Elvis Presley should still be here. And though he left us 25 years ago today, he is still with us in many ways. He is with us in pop radio, rock concerts and magazines, MTV and VH1 and so many things we encounter in everyday life.


He is with us, now and forever, in music.

It's why they call him The Boss 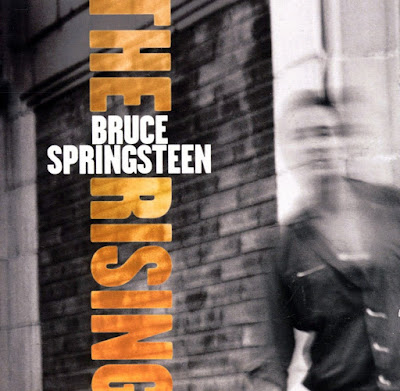 With “The Rising” Springsteen flexes his songwriting muscle

With the release of "The Rising," Bruce Springsteen has cemented his place as one of America's most important and most treasured songwriters. It is an album perhaps only he could have written and an album America needed him to write.

Much of material on this poignant recording — Springsteen's first with the E Street Band in 18 years — was inspired by the events of 9/11. But rather than simply take us back to the rubble and carnage of lower Manhattan, Springsteen offers a more mournful and ultimately more sensitive approach. The songs are told in human terms and in thoughtful ways, and rather than flag-waving and anger, he focuses on the sadness and sense of loss within individual lives and homes and on the acts of subtle heroism that are now more inclined to be noticed in everyday life.

The record opens with the moody yet lifting "Lonesome Day," a tremendous track that talks of the need for fortitude and resiliency when dealing with heartache. Its burning guitars and gospel-like backing vocals help make it one of the album's most stirring numbers. "Into The Fire" sounds like a direct homage to the heroics New York's firefighters and police officers displayed on 9/11, while "Waitin' On A Sunny Day" talks of how, even during hard times, better times may still be on the horizon.

It is within songs such as "Nothing Man," however, that Springsteen strikes the deepest chords and paints the most human pictures. The gorgeous track tells the tale of an unassuming small town man who finds local notoriety as a result of his heroism. The character, however — forever changed by what he's experienced — is uninterested in such back-patting and feels frustrated at the quick return to normalcy within his community. The song, delivered with a soft sense of dignity and humility, is also one of the album's finest tracks.

With "Counting on a Miracle,"' Springsteen sings with sheer passion, and with "Empty Sky"' his creative brush paints the sorrowful picture of the loss of love through tragedy:

Here, Springsteen again takes listeners away from the newscasts and wreckage of 9/11 and into the empty living rooms, the empty kitchen tables and empty hearts of the bereaved. 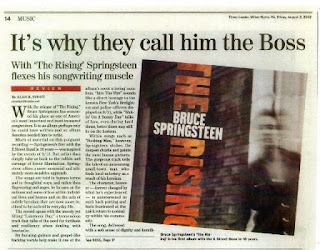 With the tribal, rhythmic and incredibly melodic "Worlds Apart" — clearly one of the best songs he's ever written — Springsteen expands the bounds of love even further. And with its Mid-eastern sounds and references, it could be interpreted as a love letter written by a soldier in combat to a woman back home.

"Where the distant oceans sing and rise to the plain,
In this dry and troubled country, your beauty remains
Down from the mountain roads, where the highway rolls to dark,
'Neath Allah's blessed rain, we remain worlds apart ...
We'll let blood build a bridge, over mountains draped in stars
I'll meet you on the ridge, between these worlds apart."

It is one of the album's most stunning moments.

The light, fun and funky "Mary's Place"' sounds as if it could have been included on Springsteen's first album, and "You're Missing" again visits the emotions of longing and emptiness that come with loss. The two tracks make for an interesting sequencing of numbers, but they do serve as a perfect segue into the album's next song and another of its hallmarks: "The Rising."

The song, an exhilarating and zesty plea for rebirth, rejuvenation and a heightened sense of spirit, could serve as an American anthem. For anyone who listens to it, it probably will.

The album closes, appropriately, with the prayerful "My City of Ruins."

Springsteen likely will pick up a load of Grammy awards next February for this alluring album, but that's probably not very important to him. With the release of "The Rising," he has, in a very real way, answered a call. There's a story, as told in the New York Times, that a few days after 9/11 an unintrusive fan approached Springsteen on the street and offered three simple words: "We need you."

Springsteen has answered, and though he was clearly inspired by everyday American heroes when he was writing this album, he also has — with sensitivity and empathy — reclaimed his own status as one.