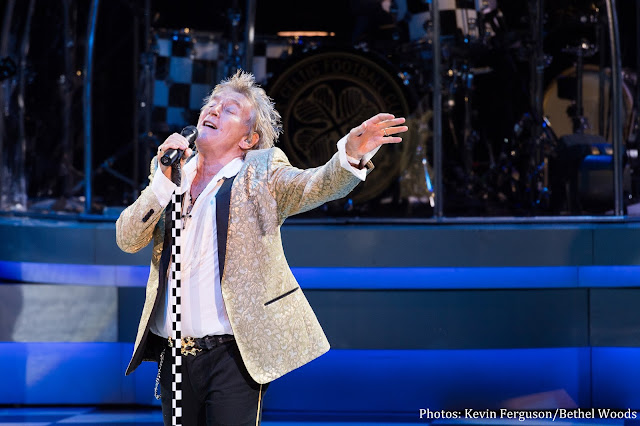 Rock and Roll Hall of Famer remains primed and polished

BETHEL, N.Y. – If we could all make a deal with the devil to look as good as Rod Stewart still does at age 72, we’d probably consider it. The legendary Rock and Roll Hall of Famer still brings a youthful bravado to the concert stage. And when he brings his timeless songs with him – an endless stream of big hits going back some 45 years – it makes for a wonderful concert experience.

Stewart was in fine form on Friday night at the Bethel Woods Center for The Arts. His voice was strong, his band was tight and his stage show was glitzy yet tasteful. Dressed in a gold blazer, he opened the show with a zesty performance of “Infatuation” and followed with “Some Guys Have All The Luck,” both from 1984.

He then added how much he loved Friday nights, and that whatever those in the  crowd of 12,500 had to do to get to the show, such as arrange for a babysitter, it would be worth their while.  And he did not disappoint.

The show’s opening act, Cyndi Lauper, joined him on stage for a fun performance of “This Old Heart of Mine” and  Stewart then ditched the blazer and led the band through a terrific rendition of “Tonight’s The Night,” which had the entire crowd singing along. The band, which featured three female backing singers and several multi-instrumentalists, was another highlight of the show. Some songs offered triple-percussion, some came with fiddles, some with saxophone, some even came with harp. Whatever the case, the music shined. 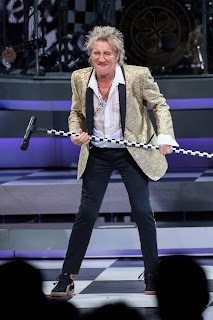 “May you stay “Forever Young,’ ” said Stewart when introducing the song, from 1988, which has  become one of his staples.  He later dedicated “Rhythm of My Heart “ to those who have served in the armed forces. With wartime images gracing the large video screens behind the stage, Stewart noted that he himself was a “war baby,” and he thanked those that have served for giving him the opportunity to live the life that he has lived. The video also included images of Steward being knighted at Buckingham Palace – an honor he received for his contributions to both music and charity.

“Young Turks” kept the fun flow of the show rolling, and though Stewart introduced “Can’t Stop Me Now” – which he wrote about his late father – as a “ a song many of you might not know,”  it was a highlight of the set. Stewart, with his English accent intact, also frequently peppered the show with his great wit. When introducing a soaring, saxophone-fueled  performance of “Downtown Train,” he noted that songwriter Tom Waits has thanked him many times for covering the song, and that his version helped Waits “put a new roof on his house and build a new swimming pool.” He then noted, more seriously, that Waits is a “great, great songwriter.”

With Stewart and the band seated on stools near the front of the stage, the show then shifted gears, offering a few acoustic-based numbers. These included “The First Cut Is The Deepest,” "Ooh La La"  - from his days with The Faces – “Reason To Believe,” “You’re In My Heart” and “Have I Told You Lately,” which was delivered with emotion and sentiment. Things then got rocking again with a cover of CCR’s “Proud Mary,” which was performed by just the band, sans Stewart, then “Maggie May” and “Stay With Me.”  For the latter, Stewart – as is his custom – kicked soccer balls into the audience.  “Do Ya Think I’m Sexy”  followed, during which Steward donned a cowboy hat. (And yes – judging from the reaction of the women in the audience - he looked good, or sexy, in it.) The show ended with “Enjoy Yourself (It's Later Than You Think).”

Though Stewart has aged gracefully and remains a vibrant performer, he also deserves credit for not trying to defy his years. His wardrobe changes throughout the show were funky yet impeccably Rod, and by allowing the members of his band moments to shine throughout the show, and adding the acoustic section, he’s able to pace himself remarkably well. Father time spares no one. We do not stay forever young. But music - or at least some music - is indeed timeless, and such is the case with the music of Rod Stewart. And though he’s not trying to fool anyone – he’s a proud war baby – he showcases all of his years in show biz with style and grace. Or ... to borrow from the title of another fine number performed on Friday night ... he wears them well.

(Alan K. Stout has covered rock and pop music in NEPA since 1992. His weekly radio show, “Music On The Menu” airs Sunday nights from 9-10 p.m. on 105 The River in Wilkes-Barre/Scranton. His concert reviews are published by the Bold Gold Media Group.)