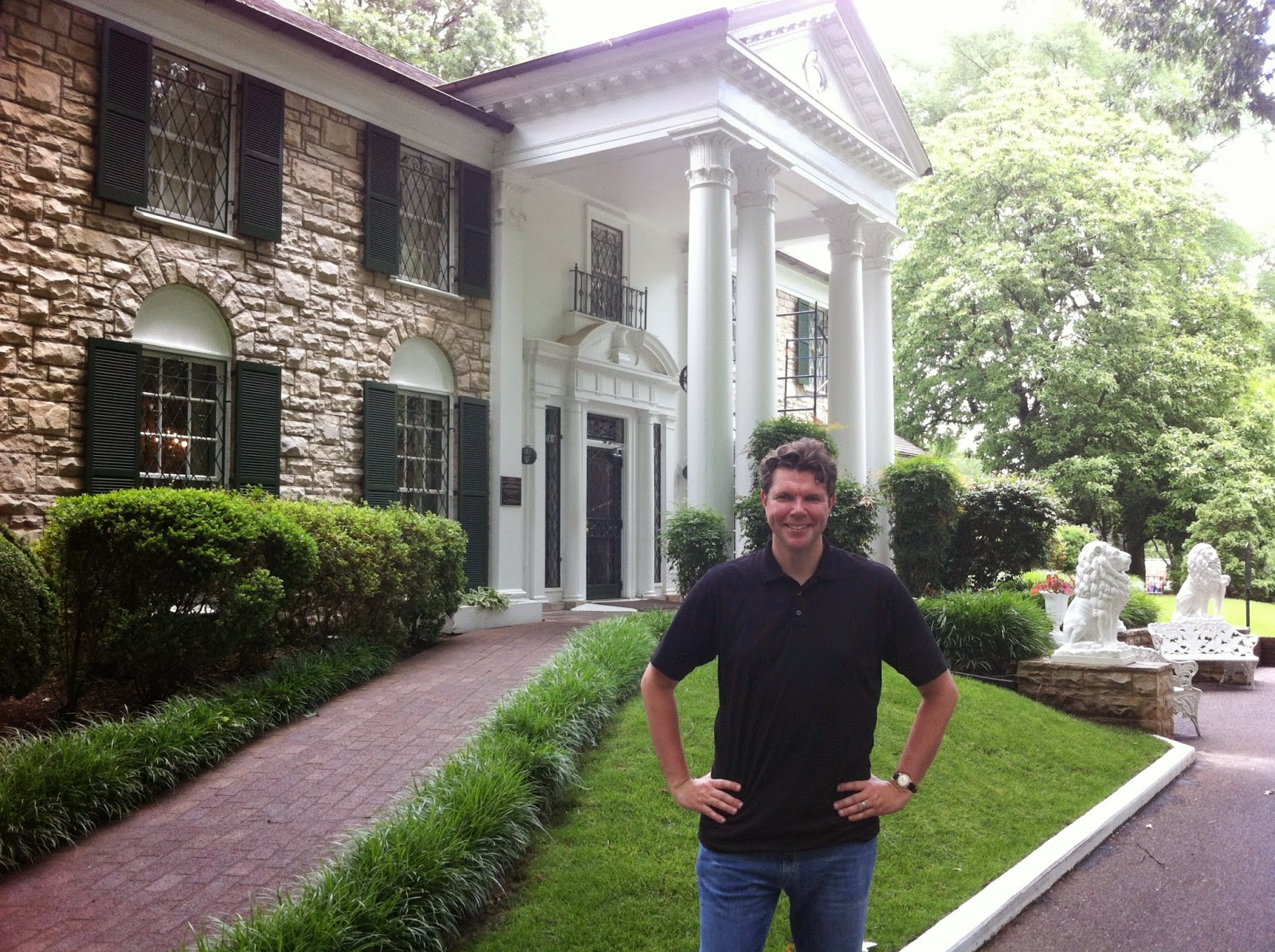 
In Memphis, the days leading up to August 16 have become known as "Elvis Week." It's a celebration of the life of city's most famous son and The King of Rock and Roll, and it centers around the anniversary of his death. Year after year, people come from around the globe to experience all-things-Elvis Presley. There's even an all-night vigil at The King's former home, Graceland. Last year, on the 35th anniversary of Presley's death, the event was attended by an estimated 75,000 people.
Think about that. There's only a handful of recording artists today that can attract that kind of crowd. They're the ones that play football stadiums, not theaters or arenas, when they're out on tour. Paul McCartney, The Rolling Stones, Bruce Springsteen and U2 come to mind, but they are a select few. And yet in Memphis, that many people showed up just to walk past a man's grave, in silence, while holding a candle. A man who hadn't sung a song in 35 years.

Such is the impact of Elvis Aaron Presley. And though I've never been to "Elvis Week," I did recently have myself an Elvis weekend. Two good friends and I - to borrow from the inspiring song by Mark Cohn - did some walking in Memphis. We're all lifelong Presley fans, and we figured it was time we got down there. And so we put on our blue suede shoes, so to speak, boarded a plane, and touched down in the land of the Delta blues. We made the 1,032 mile journey to Graceland.


It's been nearly three months since our trip, and not a day has passed that I haven't thought about it. Memphis, for anyone with an appreciation for the history of rock and roll, is a special place. And as I told some people upon my return, "I brought home a little bit of Memphis with me, but I also think I left a little piece of me there."
It stays with you.

Graceland was wonderful. Though you sometimes might hear people say that it's not as big as they had expected, I didn't feel that way at all. It's a mighty big house, and yet it still has the feel of a home. There are moments on the Graceland tour that are simply fun, such as the rooms dedicated to Elvis's gold records and jumpsuits, yet there are also moments that are sad and poignant, such as when you find yourself standing before the very same piano that Presley played on August 16, 1977 - just hours before his death. You see a swing-set in the backyard, where his daughter once played, and a pool where good times were had by family and friends. And yet just 20 yards away, you also visit his grave.


Directly across the street from Graceland on Elvis Presley Boulevard is an annex plaza. And while no merchandise is sold at the actual home and the tour is extremely tasteful and serene, the plaza is a haven for the Elvis collector. Some of the gift shops even have special themes, such as "The '68 Comeback Special" and "Elvis's Hawaii." I loved it all, and I admit I bought a bit more than I had expected. While there, you can also visit the radio booth of Elvis Radio, a Sirius XM station devoted exclusively to Presley. My friends and I got lucky upon our visit there, as George Klein happened to be broadcasting at the time. Klein is a Memphis legend on TV and radio and was a close personal friend to The King, and there is certainly something very cool about standing directly across the street from Graceland and chatting with a man who once partied there many times with Elvis. Elvis had also served as best man at Klein’s wedding, and Klein served as a pallbearer for Elvis. And there he was, more than happy to come out of the radio booth to meet with fans.
This is the type of stuff that can happen when you visit Memphis.

Of course, if you're in Memphis, you also have to visit Sun Studio. It's history is well-documented. Early recordings of not only Presley, but also Johnny Cash, Jerry Lee Lewis, Carl Perkins, B.B. King and Roy Orbison were all done there. You can stand in the exact spot where Elvis recorded "That's All Right" and you can see some of the vintage recording gear used at the time. For me, however, there was a moment at Sun that remains even more memorable. Just prior to visiting the city, I read the book "Last Train To Memphis: The Rise of Elvis Presley." Written by Peter Gurlanick, it is considered to be the definitive Presley biography. And the truth behind Elvis's early recordings at Sun, wonderfully described in the text, is actually far more interesting than the myth or the drive-by Hollywood version ...


There is a perception that Elvis walked into the studio off the street, recorded "That's All Right," quickly became a regional sensation, signed with RCA, and soon became King. But that's not what happened. Presley recorded several songs at Sun prior to "That's All Right" without much success. Sam Phillips, the owner of the studio, thought he had a pretty good voice, but there was nothing particularly special about the first few tracks he recorded. But Elvis kept coming back. He'd come to the reception area of the studio - polite, shy and unassuming - looking for more opportunities to record. This went on for about a year. The receptionist at Sun, a woman named Marion Keisker, took a liking to the well-mannered young man. Ultimately, she helped get him the session that led to "That's All Right."
I don't know how many people that take the tour of Sun fully appreciate the significance of that little reception area, where a nice young woman once took a nice young man under her wing and, is essence, changed pop culture history. Most of the people on the tour I took part in moved quickly through the reception area and into the actual recording studio, but I stood there for a while, imagining the inward yet also obviously determined young Elvis coming back again and again, hoping for another chance to realize his dream.


Keisker, when she first met the 18 year-old Presley while working in that small office, asked him what kind of singer he was. 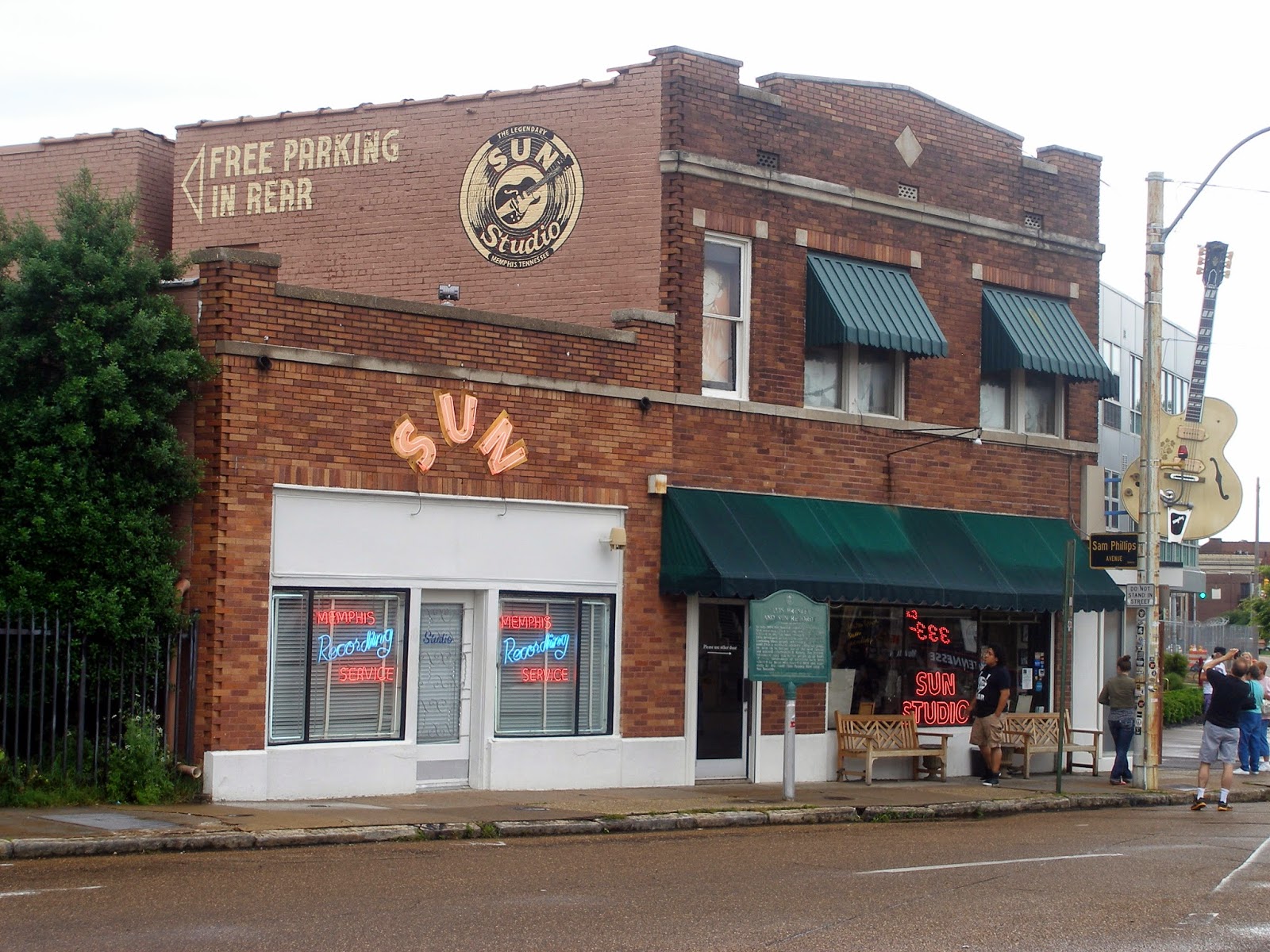 
"I don't sound like nobody," he replied.
You stand in that little room, 60 years later, and you see Keisker’s little desk, and you can still feel the moment.


These are the types of experiences you can have when you visit Memphis.
My friends and I did a lot of walking in Memphis. We visited Lauderdale Courts, a housing complex where Elvis lived during his high school years, and we stood on the steps of Humes High School, from which he graduated. We walked up on the stage of the Overton Park Bandshell, an amphitheater where Elvis performed in 1954, and we visited the site of the Lansky Brothers clothing store, where The King first bought his cool threads. We strolled by the now abandoned Chisca Hotel, the home of the first radio station to play Elvis, and we visited 1034 Audubon Drive, the site of the home that Presley bought with the royalties from his first No. 1 hit, "Heartbreak Hotel." We also took a ride out to the site of the former Stax Recording Studio, where Presley recorded material for three albums in 1973, and we even visited the old Arcade Diner, one of Elvis's favorite eateries. While there, the grandson of the original owner came over to our table and told us some great stories about some of the times Elvis had eaten there, and he pointed us towards Elvis's favorite booth. Of course, we sat in it.


These are also the types of experiences you can have when you visit Memphis.
You can also party on Beale Street and hang out at clubs owned by B.B. King and Jerry Lee Lewis. You can see the great Mississippi River and the solemn site where Martin Luther King Jr. was assassinated. We did all of that, too. And on the corner of Beale and Main Street, we visited Elvis Presley Plaza, where a striking statue stands in his honor of Memphis' favorite son.


If you are a fan of Elvis Presley, you should really try to visit Memphis. You need to go to Graceland. And Sun. And pack in as much as you can in the time that you have there. I also suggest reading "Last Train To Memphis" before you go, as well as George Klein's "Elvis: My Best Man" and Jerry Schilling’s "Me and a Guy Named Elvis." Both are entertaining and thoughtful books written by two of Elvis's closest friends, and the stories they share of their time at Graceland and growing up in Memphis will make your visit even more enjoyable. I actually read the latter two books after my visit there, and I found that having personal visuals of the city and Graceland in mind really helped bring the texts to life. Simply put: if you go there, and you can truly picture things as they were, the stories are even better.
Elvis passed away 36 years ago today. I was only nine years old at the time, but I was already a fan and I remember it well. Throughout my life, I've always done something to note the day. I'd watch an Elvis special on TV, or listen to some of his music. This year, it feels different. Though I am not at Graceland for "Elvis Week," this was the year I finally got down there. I stood on one of the same stages where he first performed and in the same room where he first recorded. I saw his home, his cars and his airplanes and met one of his best friends. I placed a flower on his grave as a gesture of thanks, for not only his music, but for all of rock music. I paid my respects to The King.


These are the types of experiences you can have when you visit Memphis.
If you've ever thought about going, do it. "TCB," as Elvis would say. Take care of business.


It will stay with you.