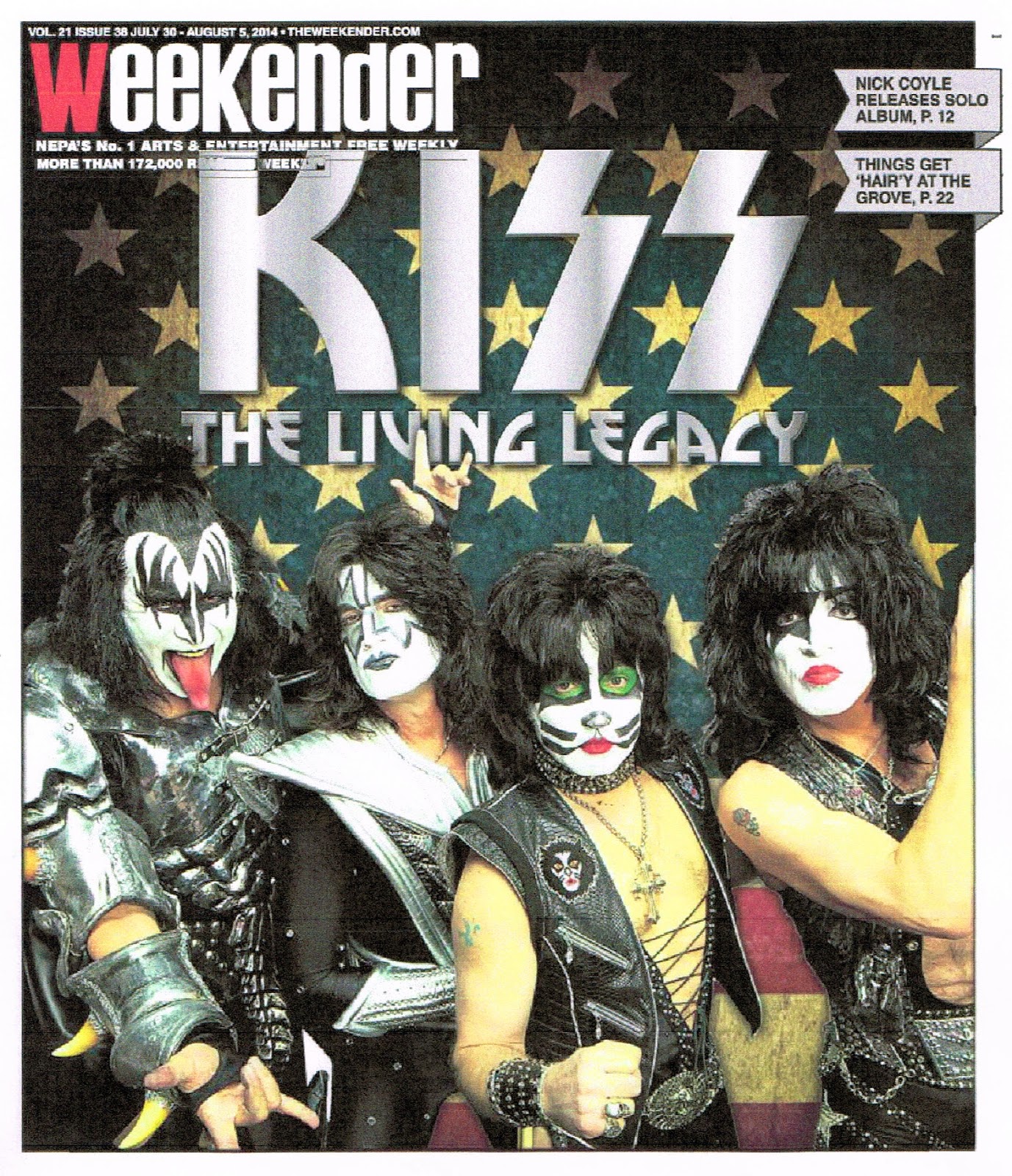 The Starchild steps up
KISS co-founder Paul Stanley talks about his new book,
the Rock and Roll Hall of Fame, a KISS without him,
and the band’s current 40th anniversary tour


For Paul Stanley, 2014 has been a very good year. So far, in just the past seven months, he has seen:


• His band, KISS, inducted into the Rock and Roll Hall of Fame.


• His band, KISS, hit the road with fellow hard-rock legends Def Leppard, where they’ve been packing them in every night.


“It’s all terrific,” said Stanley in an interview with the Weekender, adding that he was surprised by the success of the book, which debuted at No. 2 on the prestigious book list.


“It would be crazy for me to say that I expected that,” he said. “That would be nuts. It’s something that I’m very, very proud of and pleased with, because no matter how much you may hope for a certain response and think that it’s warranted, it doesn’t mean it will happen. Thankfully, the book has connected with people.”


As the front man of one of the most successful rock bands of all-time, you’d think that Stanley, 62, might have penned a book years ago. When he finally did – and was the last of the original members of KISS to do so – he said the reason for the delay was because for most of his life, he felt that his life, if discussed honestly, didn’t warrant a book, and that he hadn’t found true happiness until his second marriage, when he was already in his fifties. And though the text offers plenty of stories about the rise the triumph of KISS, some of its more interesting passages involve Stanley’s often tormented childhood, when an ear deformity brought him ridicule from classmates and from which he received little support from his parents.


“Some people have said that this was a very brave book to write,” said Stanley, a now happy father of four. “I say, ‘Well, it only would have been brave if it didn’t have a happy ending.’ Nobody wants to write from the middle of misery. It felt terrific to write, and it was cathartic. Not to write the book, but to live it. People ask if it was an emotionally taxing project, and I say, ‘No, living it was the emotionally taxing project.”


One of the more interesting stories discussed in the book took place in 1999, when Stanley held the starring role of the Toronto production of “Phantom of The Opera.” Though he’d had plastic surgery in the ‘80s to help correct his ear deformity, he writes that he still felt a strong connection to the play’s maimed central character. A woman who’d seen his performance and knew nothing about his own prior condition wrote to him, saying she “had the impression I identified with the character in a way she hadn’t seen with other actors.” She then asked him to get involved with AboutFace, an organization that helps children with facial differences cope with their situations. Stunned by her astute observation about him, he reached out to her and got involved with AboutFace.


“It was a huge part of my life, ”Stanley said . “It was certainly a transitional and pivotal time. I was going through what was leading up to a divorce, and things were becoming more clear to me, and interestingly, as that was happening, I was finding another side of myself by being able to come in contact with part of myself that I hadn’t embraced. And by embracing it, I also got to give to other people through my experiences. There was really a clear sense at that point that giving was the best way to get, and you heal by giving to others.”


Though the release of his book was a joyous time for the man KISS fans still affectionately refer to as “The Starchild,” KISS’ induction into the Rock and Roll Hall of Fame was a bit more bumpy. First, KISS had been eligible for induction for 15 years, which was seemed by many rock fans as an absurd snub. Then, when the band finally got the call that they were to be enshrined among rock’s elite, the Hall of Fame said only the group’s original members would be included, despite the fact the band had sold millions of albums and concert tickets without them. The Hall also wanted the original lineup to perform at the ceremonies, even though they hadn’t played together in 14 years. Stanley was vocal about his displeasure with the situation and the entire clique-like induction process, and though he as well as KISS co-founder Gene Simmons and original KISS members Ace Frehley and Peter Criss all showed up for the event and accepted the honor, they did not perform.


Stanley, who remains a bit miffed by the whole thing, says there are still a few other great acts out there for whom induction is long overdue.


“It’s such a sham,” he said. “Year after year, you look at the inductees, and most people on the street scratch their heads about half of them. It’s really a popularity contest for a very small group of people who actually make the decisions. That Deep Purple isn’t in there is absurd. Whether or not I’m a fan of prog-rock, that Yes isn’t in is ridiculous.”

Though KISS did a “Farewell Tour” in 2000 with its original members, Stanley and Simmons later decided that KISS should continue and revamped the band with guitarist Tommy Thayer and drummer Eric Singer - a lineup which has recorded and toured successfully for more than a decade. Earlier this year, however, Rolling Stone magazine, in a move which many felt was also long overdue, featured KISS on its cover for the very first time, and in that interview, Simmons said he felt he would only tour with the band a few more times. Stanley says he isn’t sure how much longer he’ll continue to take the stage under the bright KISS logo, but does nothing to dispel the sometimes-hinted-at notion that KISS might actually continue on without he and Simmons.

Is there an officially sanctioned KISS tribute act in the works? Such a band - with handpicked successors, a great stage show, and sent out on the road fully endorsed by Simmons and Stanley - might not be a bad idea. Though “Black Diamond: The Official KISS Show,” for example, might play theaters, not arenas and large amphitheaters, it still might be something fans could enjoy for years to come. In listening to Stanley’s words, however, the more likely scenario is that the group will indeed still be called KISS and that expectations will be the same.


“I know KISS won’t end,” he said. “The question is, ‘How long will I be a part of it, or Gene be a part of it?’ I really don’t know. As long as we can. It’s hard work, but it’s incredibly rewarding and fulfilling. In 2000, I thought it was over. It’s 14 years later, and I’m much wiser now and smart enough to know that it will continue. Though the band has never been better, I’m also aware that I’m not the only person that can do what I do. I didn’t invent what I do. I was influenced by a lot of great singers and performers, and there are people out there that are just chomping at the bit to get up on stage, and I believe there is more than one person that can go up there and blow people away. At some point, I won’t be there.”


Currently, Stanley is still there and KISS is in the midst of another successful road jaunt. This time, they’ve hit the tour trail with co-headliners Def Leppard and the two bands have been drawing huge crowds. Stanley says he’s always been a fan of the dynamic English group.


“When I first heard ‘Photograph,’ it stopped me,” he says. “It was really, really great. And over the years, they’ve proven themselves by writing just great, great songs. While I’m getting ready to play, I can hear the audience singing all of their songs. And they’re great guys. You can’t argue with the catalog they’ve created.”


Stanley is also quite satisfied with the catalog that KISS has created since releasing its first album in 1974. And he appreciates the dedicated KISS Army, which keeps coming back, every tour.


“It’s incredible,” he says. “It makes every time I go on stage a victory lap. The race is never over, but it’s great to go out there and carry the flag, 40 years later. Bands don’t stay the same, and things change, but the integrity and core of what we were is what we are. I couldn’t be more proud of the band and I couldn’t be more pleased with what we are. Clearly, there is a legend of this band, and I want to make sure that we live up to it. “


(This story is also the featured cover story in the July 30, 2014 edition of The Weekender. To view that version, click here:
http://www.theweekender.com/news/features/50000604/The-Starchild-steps-up?template=artWKD


-----------------
Alan K. Stout has covered rock and pop music in Northeastern Pennsylvania since 1992. He currently contributes stories to The Weekender, the region's #1 arts and entertainment newspaper, and his weekly radio show, "Music On The Menu," can be heard every Sunday from 9-10 p.m. on 105 The River (104.9-FM) in Wilkes-Barre/Scranton. Follow Alan's thoughts on music on Facebook at: