KISS ON THE MOUNTAIN 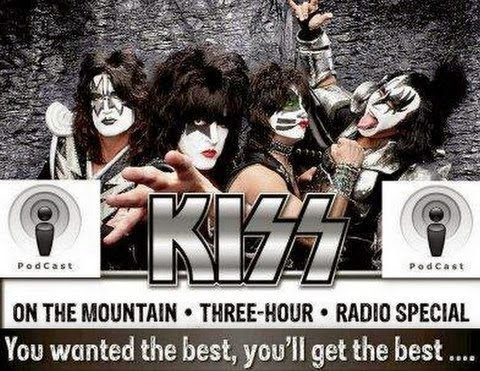 
On Saturday, September 15, 2012, 102.3-FM presented “KISS ON THE MOUNTAIN,” a three-hour radio special which celebrated the musical history of one of the most successful American rock bands of all-time. The show was done in conjunction with the group’s September 18 show at Montage Mountain in Scranton. We had a great time putting it together. And based on the feedback we received, we know a lot of people enjoyed it. In fact, thanks to the fact that info about the show was posted on the official KISS website and Facebook page, as well as some of the most popular KISS fan sites in the world, we knew we had people listening not just in Northeastern Pennsylvania, but also all around the globe.

We were also aware, however, that a show broadcast in Pennsylvania, USA, from 8-11 p.m. (EST) might not have been the best time for someone to listen in Australia, England, or Japan. And we also had some of our regional listeners tell us that they'd like to hear it again. Thus, in celebration of the recent release of KISS' new album, "Monster"  - which is currently the No. 1 album in Northeastern Pennsylvania - the entire "KISS ON THE MOUNTAIN" program is now also podcast. You can now listen to the entire radio special right here, commercial-free. And to make it even more convenient, we’ve broken it down into three segments.

What will you hear?

1. Excerpts from a new 2012 interview with Gene Simmons, during which he talks about  “Monster,” as well as several other musical topics.

3. Commentary on the music of KISS. I’ve been a fan since 1976, have interviewed the band more than dozen times, have written more than 35 articles about the group and have now seen them live 32 times. Thus, I had fun sharing a few stories.

4. More than 30 songs from all eras of the band’s career. This includes the classics and some gems that you'll probably never hear anywhere else on the radio.

What do Gene Simmons and Paul Stanley think guitarist Tommy Thayer and drummer Eric Singer bring to the KISS lineup? What are Simmons' thoughts on the 2012 tour? And, from the archives, how did Stanley feel, in the early ‘90s, when the band suddenly became the inspiration to countless KISS tribute acts and began to receive long overdue critical acclaim? What were Ace Frehley’s and Peter Criss’ fondest memories of KISS?  What were Simmons' thoughts on the grunge movement and how it affected live performances, and how do both Simmons and Stanley feel about the legend of the KISS live show? What are Stanley's thoughts on the successful non-make-up era of the band, which saw KISS continue on as a platinum act? And how does Simmons feel about the loyalty often displayed by the group's fans?

You can hear it all on the “KISS ON THE MOUNTAIN” radio special, as well as some of the band’s best songs. When discussing KISS, it’s easy to get caught up in the image, the innovative stage shows and all of the pomp, but KISS is a band that has sold 100 million records and has 28 gold albums.  It has a band that has recorded some fine rock and roll music, and this radio show, more than anything, is about that music.

You can hear the entire program simply by clicking on these three links. Just click on the image and that hour of the show will play:


We hope you enjoy the show.