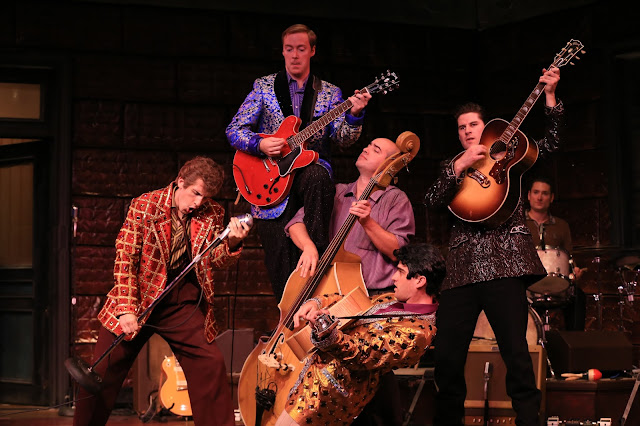 WILKES-BARRE –  Throughout the history of rock music, there have been, from time to time, brief musical explosions which took place within a certain geographic area and had a lasting impact on both music and pop culture. The aftershock of “The British Invasion” of the ‘60s - which gave us The Beatles, The Rolling Stones, The Who and Led Zeppelin – is still felt to this day. The folk scene of Greenwich Village in the ‘60s helped propel singer/songwriters onto the charts throughout the ‘70s, the Motown sound of Detroit helped change the sound of soul and in San Francisco, psychedelics helped produce a jam-based and expansive sound that continues to find new audiences. In the ’80s, on the Sunset Strip of Los Angeles, hard-rock music rose from the streets and blasted across America. And in the ‘90s, in Seattle, grunge felt like a mini-revolution.

All of those movements mattered. All gave us great music. And all had a lasting impact.

But none of them probably ever would have occurred were it not for what happened in Memphis in the mid-‘50s. It was there, some say, that rock and roll was truly born. And much of it happened at Sun Studio, a small recording facility on Union Avenue where the likes of Elvis Presley, Johnny Cash, Jerry Lee Lewis and Carl Perkins made their first records. Its owner, Sam Phillips, who had also supported blues artists such as B.B. King and Howlin’ Wolf, was always looking for something new. And when Presley gave him “That’s All Right” and Perkins gave him “Blue Suede Shoes,” he’d found it.

He had found rock and roll.

And that, more than anything, is what is celebrated in “The Million Dollar Quartet,” an at-times dazzling Broadway musical that visited the F.M. Kirby Center on Friday. The production is based on the true events of December 4, 1956 when Presley, Cash, Perkins and Lewis all found themselves hanging out at Sun Studio on the same day and in turn held a fairly lengthy and impromptu jam session. When listening to the actual recording of that session, it’s clear that it was all done just for fun and for the love of music. Perkins and Cash had already scored national hits, Lewis was a young artist on the rise and Presley - back home in Memphis for the Christmas holiday - was already the reigning king of the charts. There was a good-natured camaraderie and mutual respect between the four young men and there were quite a few laughs as they toiled around with everything from blues and gospel numbers to a few Christmas songs.

The musical production, however, takes that camaraderie and spices in a bit of drama. There is a touch of sibling-like rivalry between the characters in the play, and though that may or may not have actually existed, it does help provide some insight into what each character was likely going through at the time. Presley, who had left Sun to sign with the much larger RCA Records, missed working with Phillips. Cash already felt that he was ready to move on to a bigger label and Perkins, who had suffered a brief career setback due to an auto accident, was trying to sustain momentum. Lewis was up and coming, offbeat and full of energy and felt that his talents could easily make him the next Elvis. And at the center of it all was Philips, who knew that letting Presley go the RCA was the right financial decision but didn’t want to lose any more of his young stars.

That’s the storyline of “The Million Dollar Quartet.” And it’s a good one. But what really made the show shine was the music. Some numbers featured, such as “Peace In The Valley” and “Down By The Riverside” were actually performed by the quartet on 12/4/56. And in the spirit of artistic license – and in helping demonstrate what an incredible impact that the four musicians had on pop music - other numbers were also included, including  “Blue Suede Shoes,” “That’s All Right,” “I Walk the Line,” “See You Later, Alligator,” “Whole Lotta Shakin' Goin' On,” "Folsom Prison Blues" “Great Balls of Fire,” "Ring of Fire" and “Hound Dog."

Skip Robinson, who plays Presley in the production, did a fine job of capturing both his unpretentiousness and his charisma. Jason Cohen was fabulous as the cocky and quirky Lewis and Evan Buckley Harris gave Cash the inner-strength and decency for which he was known. Christopher Wren often tore it up on the guitar as Perkins and Matthew Scott, as Phillips, was terrific as the proud papa that feared he was losing his musical family yet also took pride when his boys moved on to bigger and better things. At one point in the musical - when Phillips is informed by both Cash and Perkins that they will soon be moving on to Columbia Records - he is initially crushed, but he then quickly ponders the possibilities and potential of another young kid from Texas that he had just signed to Sun: Roy Orbison.

The man had an eye for talent.

Jackey Good, who plays Presley’s girlfriend, Dyanne, also had a few moments to shine, including a fine performance of “Fever.” 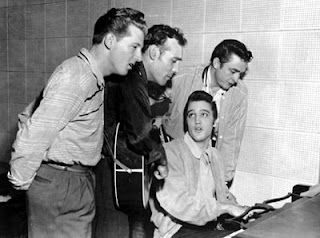 In addition to solid acting, “The Million Dollar Quartet” was also very much a concert. In addition to Robinson, Cohen, Harris and Wren, the band also featured Jody Alan Lee on bass and Jon Rossi on drums. It all made for a tight and powerful musical unit which gave the ‘50s classics a fresh energy. Simply put: the band rocked. And the entire ensemble sang flawlessly.


One of the musical's most memorable moments occurred when Robinson, Cohen, Harris and Wren - while all sitting around the piano - froze in the exact same pose captured in the most famous photo that was snapped on 12/4/56. While the four held the position, the actual photo of Presley, Lewis, Cash and Perkins appeared on a large video screen above the stage.

That alone brought a roar from the crowd.

Interestingly, for many years, the events that happened at Sun Studio on December 4, 1956 were probably not as well known as they should have been. Even today, there is a perception by some that the musical adaptation of what happened that day never actually occurred, and that the play is more of a “What if?” fictional account of what could have happened if Presley, Cash, Perkins and Lewis ever perched themselves around the same microphone. A “dream concert,” if you will. But it did happen. And though “The Million Dollar Quartet” expands upon it in many ways, the most important thing is that it celebrates it. It re-shines the light on four of rock’s most important figures at one of the most crucial points in their respective careers and it reminds us of how Sam Phillips and Sun Records helped make it all happen.

It reminds us that almost everything in rock that happened afterwards – from Liverpool to L.A – first got its start in Memphis.


(Alan K. Stout has covered rock and pop music in Northeastern Pennsylvania since 1992. His weekly radio show, "Music on The Menu," airs every Sunday from 9-10 p.m. on 105 The River. Reach him at musiconthemenu@comcast.net)