No moss here: these Stones are still rollin' 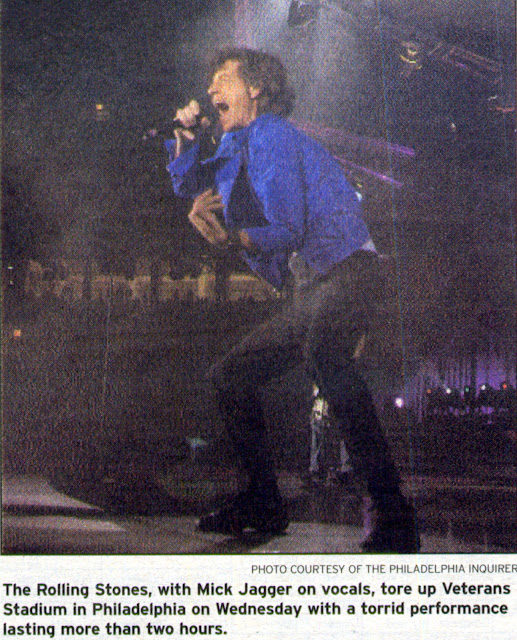 PHILADELPHIA - Perhaps the most telling reason as to why The Rolling Stones should continue to tour forever came about midway through the band's remarkable concert on Wednesday night at Veterans Stadium in Philadelphia. Sure, they've got 40 years' worth of chart-toppers and rock classics in their catalog, but one of the show's most memorable moments came when the group dished out a fabulous cover of The O'Jays' "Love Train."

Simply put: It was fun..

And so, still, are The Rolling Stones.

The band opened its show before the crowd of 36,000 with a fiery rendition of "Brown Sugar," and for the next two hours, it never let up in fervor or intensity. A stinging version of "Only Rock 'n' Roll (But I Like It)" and a powerful performance of "Start Me Up" followed. Mick Jagger, who changed attire several times throughout the night, pranced and danced in his trademark fashion, while a shaggy and delightfully haggard Keith Richards frequently broke into a broad smile and tossed guitar picks into the audience.

"Hello, Philadelphia!" Jagger shouted. "How ya doin'? We are going to have a good time tonight - yes we are!"  Yes they did.  The Stones' stage was mammoth yet also fairly simple. Huge video screens over the stage provided great close-ups throughout the show, and Jagger worked the stage with command and charisma. The new "Don't Stop," during which Jagger played guitar, proved that the band can still write good songs, and numbers such as "Tumblin' Dice" and the '80s nugget "Undercover Of The Night" balanced the set list nicely.

A beautiful performance of "Wild Horses" preceded an equally strong rendition of "You Can't Always Get What You Want," during which Jagger's vocals were particularly strong. A long, jangly, jammy, rootsy and ultimately bluesy performance of "Midnight Rambler" - spiced by Jagger's harmonica' - was another highlight.

One of the most enjoyable things about any Rolling Stones show is simply watching Keith Richards. He commands respect yet also inspires laughter, and his spaced-out yet edgy persona, combined with his musical talent, makes him one of rock's most interesting characters. And when he took to the microphone for a heartfelt performance of 1989's "Slippin' Away," he seemed to be where he most belongs: leading his rock band though a torrid show in a huge football stadium.

A terrific and tribal performance of "Sympathy For The Devil" got the crowd involved, and the entire band then journeyed out on a catwalk to another stage in the center of the stadium for a few numbers, including 1994's "You Got Me Rockin' " and a cover of Bob Dylan's "Like a Rolling Stone." Back on the big stage, the group then tore through a soulful performance of "Gimme Shelter."

The set ended with a string of favorites: "Honky Tonk Woman," which came with some racy animation on the big screens; "Street Fighting Man;" and "Jumping Jack Flash," which offered some fierce guitar licks by Richards and Ron Wood. The encore was a driving and pounding rendition of "Satisfaction." And yes, plenty of fireworks went off over the stadium and plenty of confetti blew about over the aisles.

The Rolling Stones, now in their 40th year together, may never have played better than they are playing on this tour, and they sound excellent. The musicianship is outstanding, and the overall performance shines. Why some people even question The Stones' decision to continue touring is puzzling. They've earned the right. They've done the hard work. They wrote the songs. They spent all of those late hours in studio recording the tracks. They've toured for 40 years and have built themselves into what they proclaim is the world's greatest rock 'n' roll band.

They still deliver, and, most important - be it with "Love Train" or "Start Me Up" - they are still just plain fun.