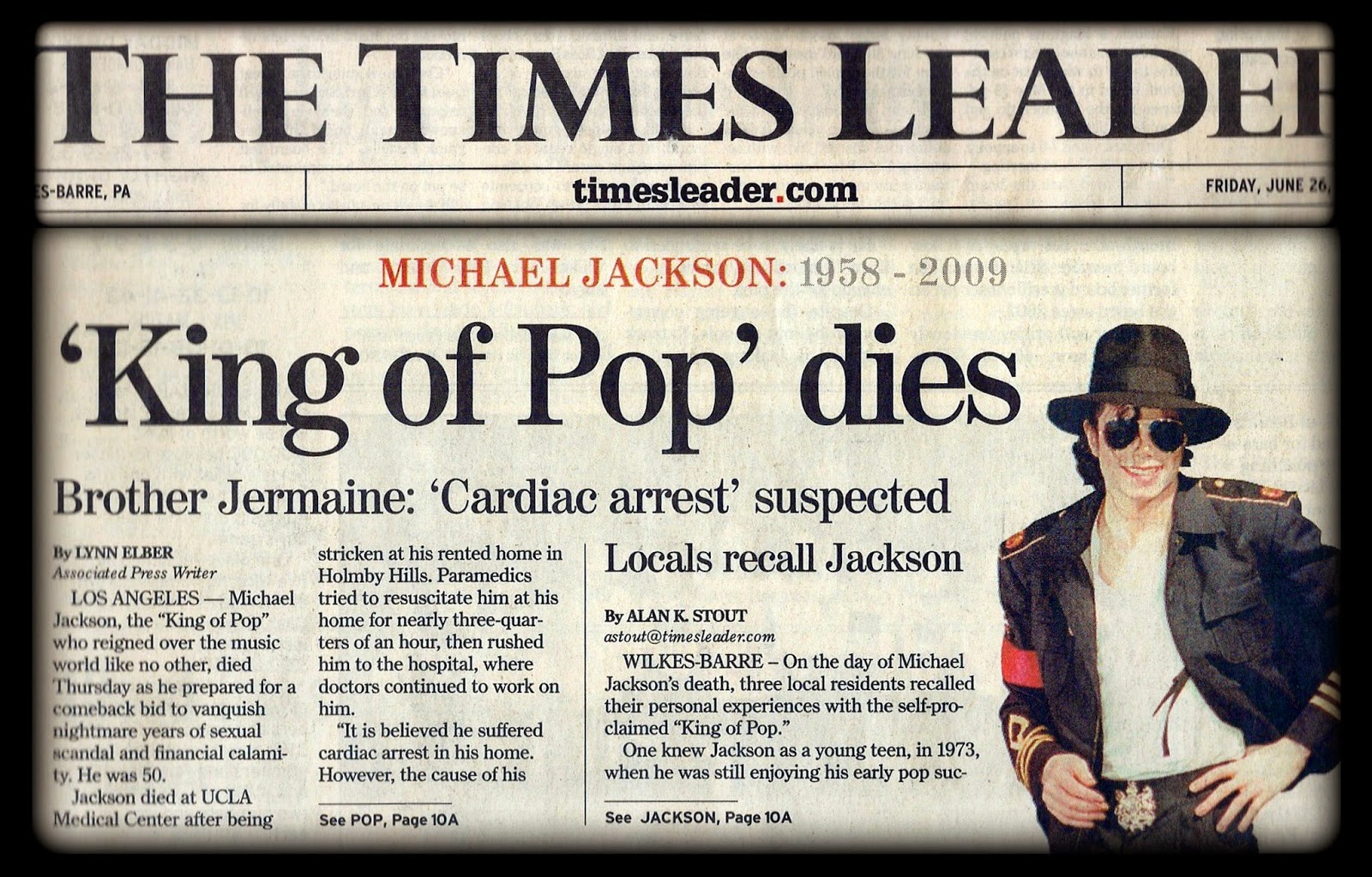 
WILKES-BARRE – On the day of Michael Jackson’s death, three local residents recalled their personal experiences with the self-proclaimed “King of Pop.” One knew Jackson as a young teen, in 1973, when he was still enjoying his early pop success. Another knew him at the absolute height of his commercial appeal, in 1984, just after the stunning success of “Thriller.” And the third covered his infamous trial during which he was accused of child molestation and from which his career never fully recovered.


Joe Middleton of Pittston worked for the Jackson 5 during the group’s 1973 tour. Middleton assisted with the merchandising on the tour and said he spent a lot of time around the young pop sensation. He recalled Jackson with both fondness and sadness on Thursday.


“The kid was a prankster,” said Middleton. “He was great. He was fun to be with. You could tell he had talent, but he didn’t have a normal childhood. Michael had no life. That’s why the kid was screwed up. He never left his father’s side. He was the cash cow. Nothing could happen to Michael. Without Michael, there was no Jackson 5.”


Middleton said he wasn’t surprised to hear stories, years later, about the negative impact that Jackson’s father, Joe, might have had on his son’s psyche.


“The father was a very stern taskmaster,” he said. “The other boys would have some time to have fun, but Michael was under the father’s thumb all the time.”


Jim Evans, president of the Wilkes-Barre-based Mountain Productions, worked with Jackson in 1984 when the company was hired by the reunited Jacksons to design and build the stage for the group’s “Victory” tour. The tour came at the height at Jackson’s popularity and was one of his first musical endeavors following the release of “Thriller.”


“He was very professional and knew exactly what he wanted,” recalled Evans, adding that Jackson had a great sense for theatrics and for what worked well in the world of entertainment. Evans said that when the company was hired to build the “Victory” stage, he traveled to California to meet with Jackson and the tour’s production manager. The meeting was arranged by promoter Don King, known best for his work in the world of professional boxing.


“We sat down at his mother’s kitchen, and she made us ham and cheese sandwiches,” said Evans, of Mountain Top. “We drew doodles (of ideas for the stage) on napkins. I wish I still had some of those napkins … but at the time, who knew?”


After the stage was completed, Evans saw several of the tour’s 55 shows. He says Jackson was very pleased with the massive, stadium-sized staging, which took about a dozen semi-trucks to transport from concert to concert.


“They were all sellouts,” he said. “He was quite the draw. There was no doubt about it.”


Steve Corbett, a former longtime newspaper columnist at The Times Leader and current talk show host at WILK radio, wrote about two of Michael Jackson’s trials while working for a newspaper in Santa Maria County, Calif. In 2005, Corbett covered the trial during which Jackson was accused of child molestation. Two years prior, he also covered a civil trial in which Jackson was being sued by a concert promoter for allegedly backing out on an agreement to perform several shows. At that trial, Jackson himself took the stand to testify.

“That’s where the photographs were taken, during his testimony, of him putting his fingers up to his head like devil horns, and like a rabbit,” said Corbett. “He was acting very, very strange, even for Michael Jackson. He was making contact with people in the audience with hand signals and really, really looked like he was having some difficulties. He was inappropriate. His behavior was wrong.”


At the 2005 trial, Corbett says that he – like many others – began to view Jackson with some sympathy, but only to a certain extent. “He was a tragic figure,” said Corbett. “You could see it. You could sense it. But I also watched testimony from not only the little boy who accused Michael Jackson of molesting him, but also the mother of the other little boy – where there was a settlement – and she would raise the hair on the back of your neck. When you would listen to how Michael Jackson made these friends with these children, it was very, very scary.”


Corbett said that during the five-month 2005 trial, he began to get a sense of Jackson’s inner demons.


“You got to see how Michael Jackson was a child himself,” he said. “He had not developed, even though he was a master and perhaps a brilliant genius. His childhood was far from one to be envied, and he was a clearly tragic figure, but he was a dangerous person as well. I listened to all of the testimony and all of the witnesses, and I absolutely believed that Michael Jackson was guilty.”


Jackson was acquitted on all charges. Corbett’s reaction to his death was diplomatic.