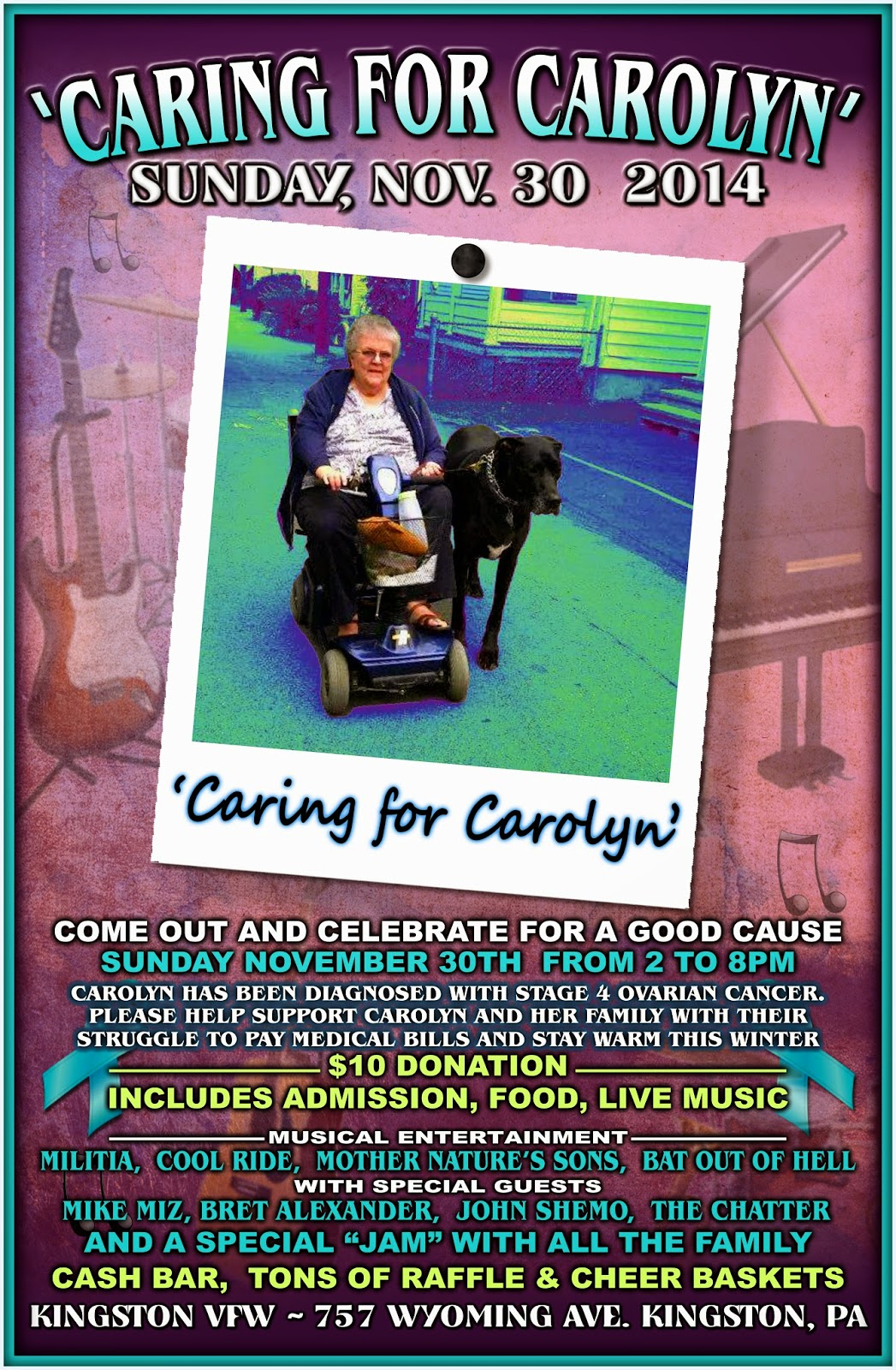 Siblings, as well as many area musicians, unite to help ailing mom

Music has always a big part of life for Van, Bob and Freeman White. The brothers, over the years, have played in some of NEPA’s best and most popular bands. Their sister, Laura, also sings, and when the four were growing up, they sometimes sang a cappellea songs together.

Music runs in the family.

The past three years, however, have not been easy for that family. Their mother, Carolyn White, 71,  was diagnosed with stage-four ovarian cancer in the spring of 2012. The diagnosis came only about six months after her home was destroyed in the September of 2011 floods that hit parts of the Wyoming Valley. It also came only six months after she lost her own mother.

“The house was destroyed, she lost her mother – our grandmother – and a few months later, she was diagnosed with cancer,” says her son, Van. “She went through radical surgery, which was done at Lehigh, and she went through chemo. Initially, we got a clean bill of health. All of the scans said the cancer was gone. That was around Christmastime of 2012. It was a big Christmas present. And then a while later, she was again having some abdominal pain, and the cancer had come back.”

Currently, Carolyn continues to battle and has resumed chemotherapy. And to help her with her living expenses during this difficult time, her family is hosting a special benefit show, “Caring for Carolyn,” which will take place on Sunday, Nov. 30 at the Kingston VFW. Performing will be Militia, Cool Ride, Mother Nature’s Sons and Bat Out of Hell. Special musical guests will include Mike Miz, Bret Alexander, John Shemo and one of Carolyn’s favorite acts, The Chatter.

Van says that though he and his brothers have performed at hundreds of benefits over the years, all in an effort to help others, this is the first time they’ve been on the receiving end of such good intentions.

“I've never done something this close to home,” he says. “To my knowledge, we’ve never had a benefit for someone in my family. And the response, to be honest, was overwhelming. We’ve been involved with the music scene in this area for so long. I started playing out in bands when I was 16 or 17, and I’m 41 now. Everybody wanted to be a part of this. It’s going to be an amazing show.”

“This is called the ‘Valley with a Heart,’ and that's what it is,” says Freeman. “We were overwhelmed with the response from friends and musicians to offer any help needed. I am amazed and humbled by all the generosity. This area has some amazing musicians, and every one of them that I talked to offered to help without blinking an eye. Most people that I spoke to agreed to do it before I finished asking the question.”

Van says the that event has also brought healing to the family. He explains that after their mother’s home was destroyed in the flood of 2011, the family squabbled during the rebuilding process.

“We all didn’t see eye to eye on a lot of things,” he says. “It caused a lot of stress and a lot of tension, and it really put a wedge in the family. But with Mom going through cancer, we’re putting all of that aside. We’re family. We’re ‘family first.’ This is for our mother, and we’re call coming back together. It’d drawing us all back in and it’s creating that family feeling again.”

That, says Van, makes the event even more special, especially since their mother has always been supportive of their interest in music.

“We all starting singing together,” he says. “We’re going to a little piece at the benefit, which is going to be all of us – just the family. It will be myself, my brother Bobby, my brother Freeman, and my sister Laurie. When Bat Out Off Hell plays, I’m playing drums, Freeman is playing keyboards, Bobby is singing and my sister is also singing. So for the very first time, all of us will be on stage at the same time, which is big for us.”

Bob, when asked for his thoughts on the event, puts it simply: “My mother gave us all the music,” he says. “It's time to give it back.”

In addition to music, the event will feature raffle prizes and cheer baskets. Sound is being provided by Rock Street Music, which has been very supportive.

“She’s very excited about it,” says Van. “As far as us coming together as family and performing together, this is something she has wanted to see happen for years.”

(Alan K. Stout has covered rock and pop music in Northeastern Pennsylvania since 1992. His weekly radio show, “Music On The Menu,” can be heard every Sunday from 9-10 p.m. on 105 The River. This story also appears in the Nov. 25, 2014  issue of The Weekender.)