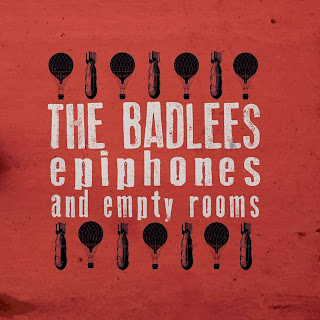 MUSIC ON THE MENU
October 9, 2013
Swagger. Sentimentality. Bravado. Thoughtfulness. Continued artistic growth. After more than 23 years of making records, that’s what you’ll find on “Epiphones & Empty Rooms,” the latest release from The Badlees. The reigning kings of Pennsylvania roots-rock are back with style and grace on this stirring 21-track, double disc-set, and as it has done with every album, it is a band that again shows an uncanny ability to remain true to its core sound yet also break new ground.

The first disc features songs sung by the band’s frontman, Pete Palladino. And while some of the tracks have a bit of the power-pop flair that Palladino loves, these tunes also have teeth. “World In The Way” is a melodic yet also forceful gem, while “Wanderlust” is a gritty roadhouse stomper that sounds as if it were written to be blasted in the car while speeding down the interstate.

(Has there ever been a greater car band than The Badlees?)

“Waiting On A Memory” also comes with plenty of hefty hooks and groove, with guitarist Dustin Drevitch adding to the bite. The chorus and the melody to “All At One Time” is so damn catchy you’ll likely find them running through your head all day after just a few listens, and disc one closes with one of the finest tracks on the album: “The Man Who Went Away (John Galt’s Blues.)” It’s a crafty and moody treasure that’s both breezy and thumpy, and with a pounding rhythm section, violinist Nyke Van Wyk’s tasteful touch and some blistering guitars helping bring the song to its conclusion, it’s the perfect way to end the Palladino side of the record, who has never sung better.

All of the songs on the album were written and produced by Bret Alexander, who also played seven instruments on the tracks. And when he steps up to the microphone to take lead vocals on disc two, he also delivers. “Vigilante For The Golden Rule” is an edgy, hell-raising, steamroller of a tune, while “Nothing Like The Real Thing” is one of the coolest tracks on the record yet also sounds unlike anything The Badlees have done before. Like “Vigilante,” it’s got tons of groove and bounce.

The band embraces its Pennsylvania roots with the soaring “Appalachian Blues,” and both “The Poet”and “Your Alamo” are perfectly simple yet also grand and poignant. The second disc closes with the masterful, “A Place To Call Home,” which ranks as one of the most beautiful songs the band has ever recorded. It begins with the story of an early 20th century immigrant, then spans several generations, ranging from a World War II veteran to a man struggling to support his family in modern times. Here, there's also a bit of a regional feel, yet with its gorgeous melody and thought-provoking storyline, it should appeal to anyone who has ever tried to empathize with a challenging journey. Some may see their grandfathers in the song. Some may see their fathers. Some may see themselves.

“Epiphones & Empty Rooms,” in theory, shouldn’t work. Double-disc sets usually have too much material for even the biggest of fans to easily digest, and the concept of having one vocalist on one disc on another on a second disc is highly unusual. But here, with the mighty Badlees, it not only works, but it makes perfect sense. All that it has done is allow more room for more creativity and more fine songs. All that it is has done is make way for an epic triumph.