Ultimate KISS ARMY Experience
gets you closer than ever to KISS 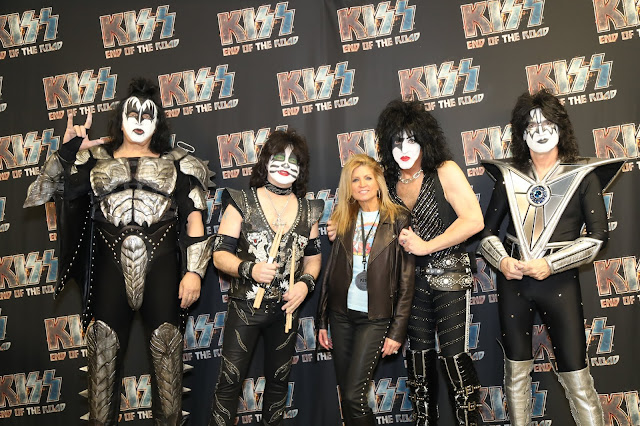 Imagine that you are a KISS fan and that you have been so for many years. You’ve got all of the band’s albums and, within the KISS Army, you see yourself as a five-star general. You’ve got at least 20 ticket stubs from their concerts, and though it might be a bit hard to squeeze into it these days, you’ve still got your concert t-shirt from your very first KISS show. You’ve also got a sizable collection of KISS collectables, and you might even joke that when it comes to KISS trivia, you know more about the band than even Gene Simmons and Paul Stanley.

But … have you ever actually walked on the KISS stage? Stood right before their mic-stands? Have you ever held Gene Simmons' bass or Paul Stanley’s guitar? Sat behind Eric Singer’s drum kit? Peeked inside Tommy Thayer’s traveling guitar case? Held Gene’s torch, into which he breathes fire? Tried on Paul’s platforms and Gene’s dragon boots? Hung out with KISS in a relaxed setting before the show, where not only can you get a professionally-taken photo of you with the band, but you can also mingle with the group and take some fun selfies.

But, with the “Ultimate KISS ARMY Experience,” that’s exactly what you can do. It is the most deluxe VIP package that the band has ever offered to its fans and includes a type of backstage access and on stage access that has never been available before. You literally spend about three hours backstage and then watch the show from a special area, directly in front of the stage, which is actually several feet closer than the very front row. And when KISS recently brought its “End Of The Road” tour to the Wells Fargo Center in Philadelphia, a handful of KISS die-hards did just that.

“It was awesome, “ says Jodey Mutcher, 49, of Stroudsburg, PA. Mutchler, who has been a KISS fan since she was nine years old, says that since this is indeed KISS’ final tour, she felt it would be her last chance to get a closer look at “The Hottest Band in the World.”

“I’m surprised we had such access to the stage, and were able to touch their equipment,”  she says. “That’s a lot of trust that they have in their fans.”

The “Ultimate KISS ARMY Experience” tours are run by Epic Rights, a company that also handles KISS’ tour merchandise. Cost, per person, is $6,500.They are hosted by Keith Leroux, an assistant to the band who also handles its social media. Leroux was chosen to give the tours because he’s not only an employee of the band, but also a die-hard fan of the group with encyclopedic knowledge of all-things-KISS. That, combined with his cheerful demeanor and enthusiasm, makes him the perfect tour guide.

“I enjoy just being here,” says Leroux. “It’s amazing.  I love to see fans share with the band what I get to experience all the time.”

Leroux says even he’s surprised at how much the tour offers.

“When we put it together, it was intentionally expensive, so that it was limited,” he says. “They wanted it to be limited. They wanted it to be for the die-hards, but not where there are 50 people showing up. I really didn’t think the band would allow us to do everything we did. There was a wish-list. And they approved everything. The pit, from where people see the concert – no one has ever been allowed there before. And for all kinds of reasons … insurance, the pyro … the pyro literally had to be moved back, because a person who doesn’t work for KISS can’t be within a certain number of feet of the pyro. And so by allowing the fans in the pit, it changed the layout of the stage show. Even most crew members and band members don’t go where we go on the tour. They don’t need to. Their job might be in just one area, and if you don’t need to go on stage, you don’t have a pass to go on stage.

“Fans are truly going into places where nobody can go,” he adds. “And again, when we put the list together for KISS, I thought for sure they were going to pair it down. But they approved every single thing.”

KISS’ “End of The Road” show is the most mammoth of its career. It convoys from city to city with more trucks and buses than ever before. The KISS crew alone consists of 75-80 people  and about 100 local stage-hands are also brought in for each show. Even with nearly 200 people working, it still takes 10 hours to assemble. Once fans begin an “Ultimate KISS ARMY Experience” tour, they are escorted to the soundboard area, where they get their first glimpse of the stage. Soon, they are on the stage, where they are not only permitted to take any photos they’d like with their own phones or cameras, but they are also professionally photographed by Leroux or other members of the KISS staff, who later provide those photos to the fans. While on the stage, you can stand behind the band’s mic-stands and sit behind the drum kit. (It is there, behind the drums, when looking out into an 18,000 seat arena, when you truly feel as though you are sitting in the cockpit of KISS.) You also hold Simmons' torch and walk inside Simmons' special off stage area where he stores his basses and “blood” for his on-stage antics. Later, you can hold and pose with one of Simmons' basses and Stanley’s guitars, and before it’s time to go and try on their boots and hang out with the band, there’s also a special lounge with a catered meal and open bar.
There's also a chance, at any given time while on the tour, that you might bump into Doc McGee, KISS' legendary manager, or that even one of the members of the band might join in for a while, sans makeup and costume.

The “Ultimate KISS ARMY Experience” is usually comprised of about 6-10 people in each city. And, as you’d expect, they are serious, die-hard KISS fans and ones with the means to afford it. Regarding the cost, some might compare it to attending a major sporting event. Each year, thousands of NFL fans from around the nation make a pilgrimage to the Super Bowl. They might spend thousands of dollars just for the tickets, plus airfare, hotel costs, food, souvenirs … it all adds up, rather quickly, to about the same amount as the cost of the “Ultimate KISS ARMY Experience.” But those NFL fans don’t get to walk around on the actual field before the game, or hold the footballs that are going to be used in the game, or hang out with their favorite players just before they take the field and have photos taken with them, or watch the game from right on the sidelines. That, in essence, is what “Ultimate KISS ARMY Experience” offers to KISS fans. And for them, KISS is their favorite team and “The End Of The Road Tour” is the Super Bowl. And in most cases, extensive travel isn’t even necessary, as the tour is likely coming right to you.

Ray Scipione, 48, of Hammonton, N.J. has been a KISS fan since 1979. Once he heard about the “Ultimate KISS ARMY Experience,” he signed right up. The main reason, he says, was to be even closer than the front row.

“I really wanted to be up close,” says Scipione.  “All of this other stuff is icing on the cake.”

“It’s an expensive night, but I live life on experiences,” he says. “You can only buy so many cars, or jewelry or clothes. For me, it’s this. It’s waking up five years from now and saying, ‘Man, remember that night I did all of that?” There are people that just save, and they never live their life with any experiences. They just save and save, but they never do anything. I’d rather do this, where I can look back, and have pictures and videos, and I can relive the night.”

Joe Lagana, 58, or Orwigsburg, PA, has been a KISS fan since 1974 and saw them for the first time in 1976. He’s now seen them more than 75 times and he also took the “Ultimate KISS ARMY Experience” tour in Philadelphia.
“It was simply awesome,” says Langana. “To get to try on their boots - it’s just simply awesome. And it’s a very comfortable pace. Nobody was rushed. Keith is great.”

Lagana said that though he’s done other VIP packages in the past, he opted to do the “Ultimate KISS ARMY Experience” because of all of the newly added extras.

“It’s ‘The End of The Road,” he says. “It’s the final tour. You probably won’t have the opportunity to do this again.”

“What’s cool about it is that it’s a small group and we got to take our time,” he says. “You’re on the stage for 20 minutes, or a half an hour, you’re walking into the areas where they go to off stage in between songs. You get to hold their guitars, put on their boots – that’s crazy. And you get to talk with like-minded fans, about your experiences and how you became a fan. You’re building relationships and making friends.

(The Ultimate KISS ARMY Experience is available before every show on the band’s “End Of The Road” tour. For more information, visit www.kissonline.com)

Alan K. Stout has covered rock and pop music in Northeastern Pennsylvania since 1992. His weekly radio show, “Music On The Menu,” airs every Sunday from 9-10 p.m. on The River. Reach him at musiconthemenu@comcast.net