Thank you, Mom and Dad … 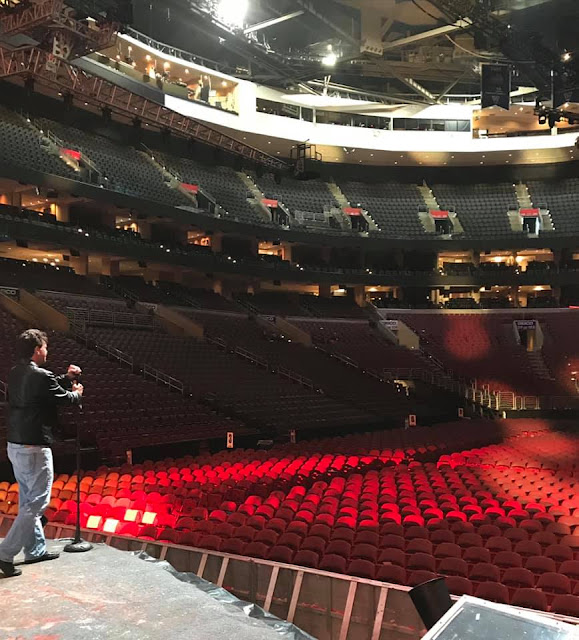 … and thank you, KISS

A lot of amazing things happened in Philly for my son and I on March 29. Some people did some very nice things for me. And I know, based on what they told me, that they did them because they came to know and respect my work and that, over the years, I have dedicated a good portion of my life to supporting good music and celebrating good music.

I posted quite a few photos of our KISS experience on social media, mostly of my son. But this one here is one of my favorites of me. Standing on stage at the Wells Fargo Center. I’ve seen everyone from Paul McCartney, to Bruce Springsteen, The Who, Billy Joel, Madonna, Eric Clapton, U2 and countless others stand on stage there.  It is, looking out over the 18,000 seat arena, a surreal feeling. And somehow I found myself there, standing before, ironically enough, Paul Stanley’s mic-stand. It was seeing him on stage, in Philadelphia 35 years ago, that helped put me on this wonderful musical journey. He is the greatest frontman I’ve ever seen, and his band is the greatest live band I’ve ever seen, and somehow my son and I found ourselves walking on their stage.

Later in the evening, after the show, when all was quiet, I was thinking about how much I loved music when I was a teen, and how my parents supported that love. They’d drive me and my friends to the “Midnight Movies,” to see films like “Tommy,” “Let It Be,” “The Song Remains The Same” and “Quadrophenia.” Sometimes, at age 15 or 16, my Dad would pick us up after the movie at 2 a.m. When we weren’t yet old old enough to drive out of town for big shows, my folks would drive us. Drop us off at the arena. Pick us up after the show. Everywhere from Philly to Allentown to NYC. And, before I got my first high school part-time job and had my own money, they’d always give me a few bucks to buy that album or music magazine that I wanted.

Sometimes, my parents had to reel me in a bit. I remember once, around 11th grade, my Mom felt I was spending too much time in my room with my records, with my headphones on, rather than on my studies. She was a sweetheart, but when she was mad, sometimes her Irish would slip out a bit.

“Alan,” she said. “All you care about is the goddamn Who.” That wasn’t true. All I cared about was KISS, Bruce Springsteen, The Police, The Beatles, Van Halen and The Who. And really, my grades were fine. And they kept letting me go to concerts.

(Mom, by the way, actually loved The Who.)

This photo is for my late Mom, and for my Dad. Thank you. Thank you, for when you noticed that I found something I really loved, just letting me roll with it.

And thank you, KISS.

As we were walking from the arena back to the car after the show, my 10 year-old son said to me, “I’m still trying to process what just happened.” And then he asked me if we could go to see KISS again in Hershey.

Thanks for that as well, KISS. It might be “The End of The Road” for you. But for him, the musical journey is just beginning. And that, after tonight, I know is because of you. And because of the things that my Mom and Dad did for me, all those years ago.

Alan K. Stout has covered rock and pop music in Northeastern Pennsylvania since 1992. His weekly radio show, “Music On The Menu,” airs every Sunday from 9-10 p.m. on The River. Reach him at musiconthemenu@comcast.net